Judge: Past violence claims against former Mesa officer can be used in trial

During a pre-trial hearing one of the officer's exes said she suffered emotional and physical abuse. 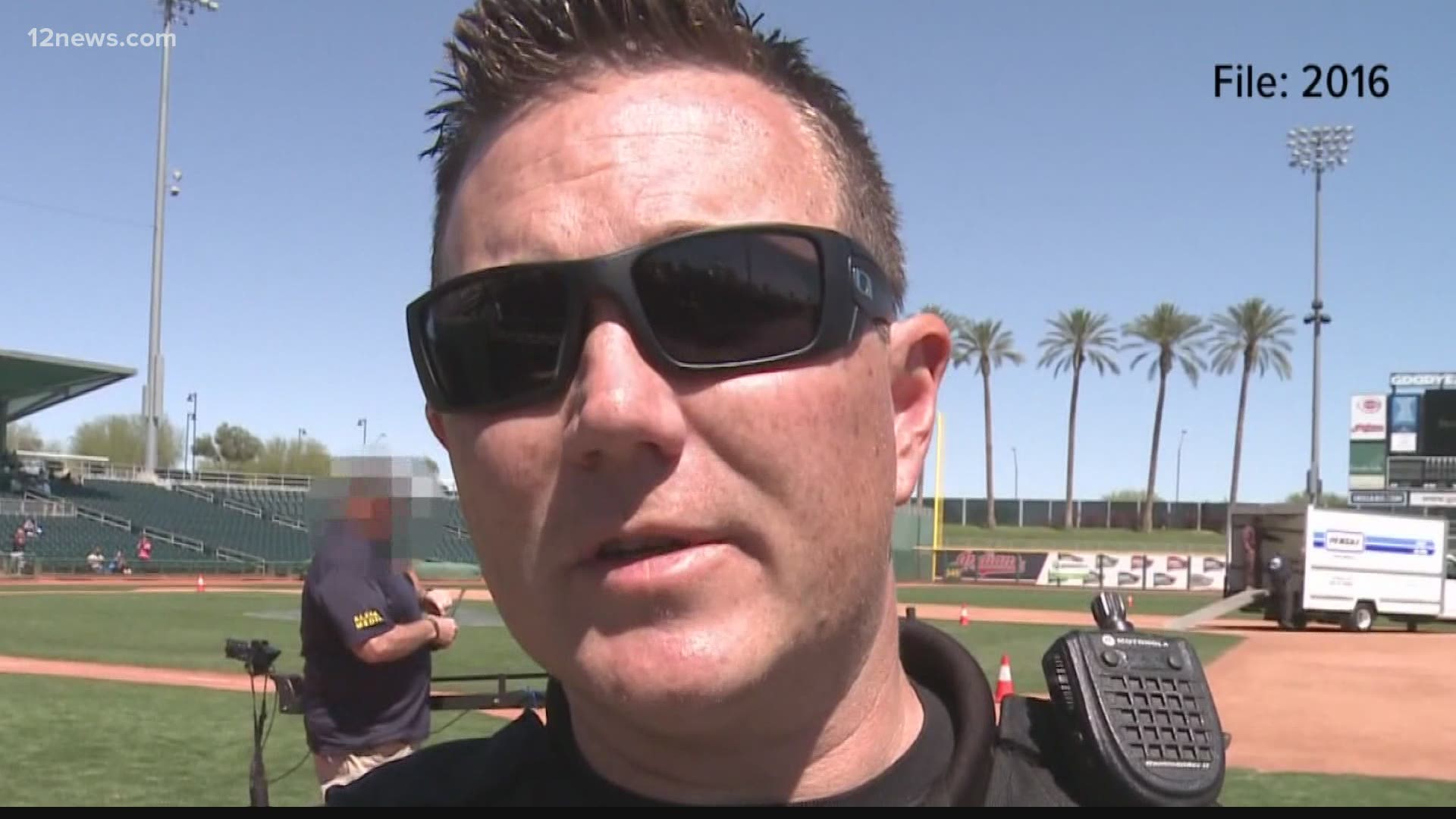 MESA, Ariz. — A Maricopa County Superior Court judge has ruled that previous allegations of domestic violence can be used against a former police officer who stands trial of assault.

During a pre-trial hearing on Monday, one of Callender’s former girlfriends testified that while she dated Callender in the mid-2000s, she suffered emotional and physical abuse to the point she didn’t care whether she lived or died.

“He was standing by the window, crying, very upset over something we were arguing about. And he had a gun in his hand that he pointed at my chest. And at that moment I just thought he was going to pull the trigger and I wished that he did because I was in so much despair at that moment, it seemed like that was the only way out for me,” the woman told the judge.

12 News is not identifying the woman because she is an alleged victim of sexual assault.

She is one of three former girlfriends who testified against the former K9 officer. The judge ruled their testimony can be used in an upcoming trial involving a more recent domestic violence charge involving a fourth woman in 2017.

“There are striking similarities between the events described that have occurred anywhere from four years to 25 years ago,” Judge Jennifer Ryan-Touhill said in court. “The court finds the witnesses were truthful in their testimony and the court has given the testimony from these witnesses the weight that each deserves.”

During the hearing, Callender’s attorney argued that in order for the women to be believed, Callender would have had to have possessed undue influence over his bosses at the department.

“And your honor, there’s isn’t clear and convincing evidence that any of these instances happened,” said attorney Kyle Reedy.

Callender is scheduled to go on trial in October for allegedly assaulting a Gilbert officer he was dating in 2017, causing her to suffer broken ribs. The three women who testified Monday are current or former Mesa Police officers Callender dated at different times during his career. Callender allegedly punched one woman in the mouth and threw another to the ground. The women described him Monday as suicidal and emotionally unstable.

Callender was investigated by Mesa Police at various points in his career for some of the allegations and received discipline but was never terminated.

The 2019 internal investigation of Callender by Mesa Police concluded that no criminal charges would be filed against Callender because the allegations from his prior relationships were past the statute of limitations and the then-current girlfriend declined to cooperate in the investigation.

Judge Ryan-Touhill expressed concern during Monday’s hearing that over the years the female Mesa police officers did not feel they could speak out fully against Callender in the workplace.

“A culture may have existed at the department 25 years ago where victims may not have been believed and issues were not investigated,” Ryan-Touhill said. “The court finds the witnesses are credible. They were hesitant to speak out to their employer out of fear of embarrassment or loss of employment.”

In response to those concerns, a spokesperson for Mesa Police said it is difficult for the department to comment on how things were handled as far back as 25 years ago.

“However, we certainly acknowledge what has happened in the past. We are proud of these women for their courage and for helping this department move forward and enact change,” said retired Detective Steve Berry of Mesa Police in a statement to 12 News.

“Just as things have evolved in society on how domestic violence cases are viewed and investigated, our agency has evolved as well,” Berry said.

Berry said the department is “constantly evaluating itself” to ensure allegations of misconduct by employees are investigated fully.

Callender was disciplined four times during the first half of his career, but details of those cases are not available because the department has a policy of purging records of officers’ disciplinary past as allowed by state law.

When asked whether that policy may contribute to officers’ not being held accountable for patterns of wrongdoing, Berry said there are systems in place to maintain records of purged items. However, those records are extremely limited.

“Although the full case may have been removed, the purge record would show the original allegation and the resolution of the case,” Berry said. “If a pattern were to develop, staff would be able to review the log and make the appropriate determinations. Some investigations are not purged at any date, such as a case that required Brady reporting.”

The Mesa Police Department is aware of the judge’s comments related to the past handling of internal investigations related to the Scott Callender case. As you can imagine, it would be difficult for us to comment on how things were handled as far back as 25 years ago. However, we certainly acknowledge what has happened in the past. We are proud of these women for their courage and for helping this department move forward and enact change. The Mesa Police Department is constantly evaluating itself to ensure that allegations of misconduct are not missed and are fully investigated. The only way to maintain the trust and support of our community is hold those accountable who violate policy, laws or the public trust. Regarding your question on tracking allegations that may have occurred years ago, or had been purged per policy, there are systems in place to maintain a record of all purged items. Although the full case may have been removed, the purge record would show the original allegation and the

resolution of the case. If a pattern were to develop, staff would be able to review the log and make the appropriate determinations. Some investigations are not purged at any date, such as a case that required Brady reporting. Just as things have evolved in society on how domestic violence cases are viewed and investigated, our agency has evolved as well. All cases of officer misconduct, certainly including domestic violence would be fully investigated in a fair and impartial manner. If the allegations are sustained, the case is adjudicated internally and through the court process if appropriate. Domestic Violence is an often under reported crime. The victim might have the normal fear of embarrassment as anyone would and then a more overwhelming feeling of embarrassment and judgement simply because they are in law enforcement. These are all difficult cases, and our department certainly stands with anyone showing the tremendous courage to come forward and report the situation. Chief Cost is aware of the case in question and fully supports the department members as the case moves through the court process. Although we cannot change the past, we can certainly ensure that any future allegations are addressed and we will support every victim to the best ability of our department.