Jake Angeli was charged with knowingly entering or remaining in restricted building or grounds without lawful authority, violent entry, and disorderly conduct. 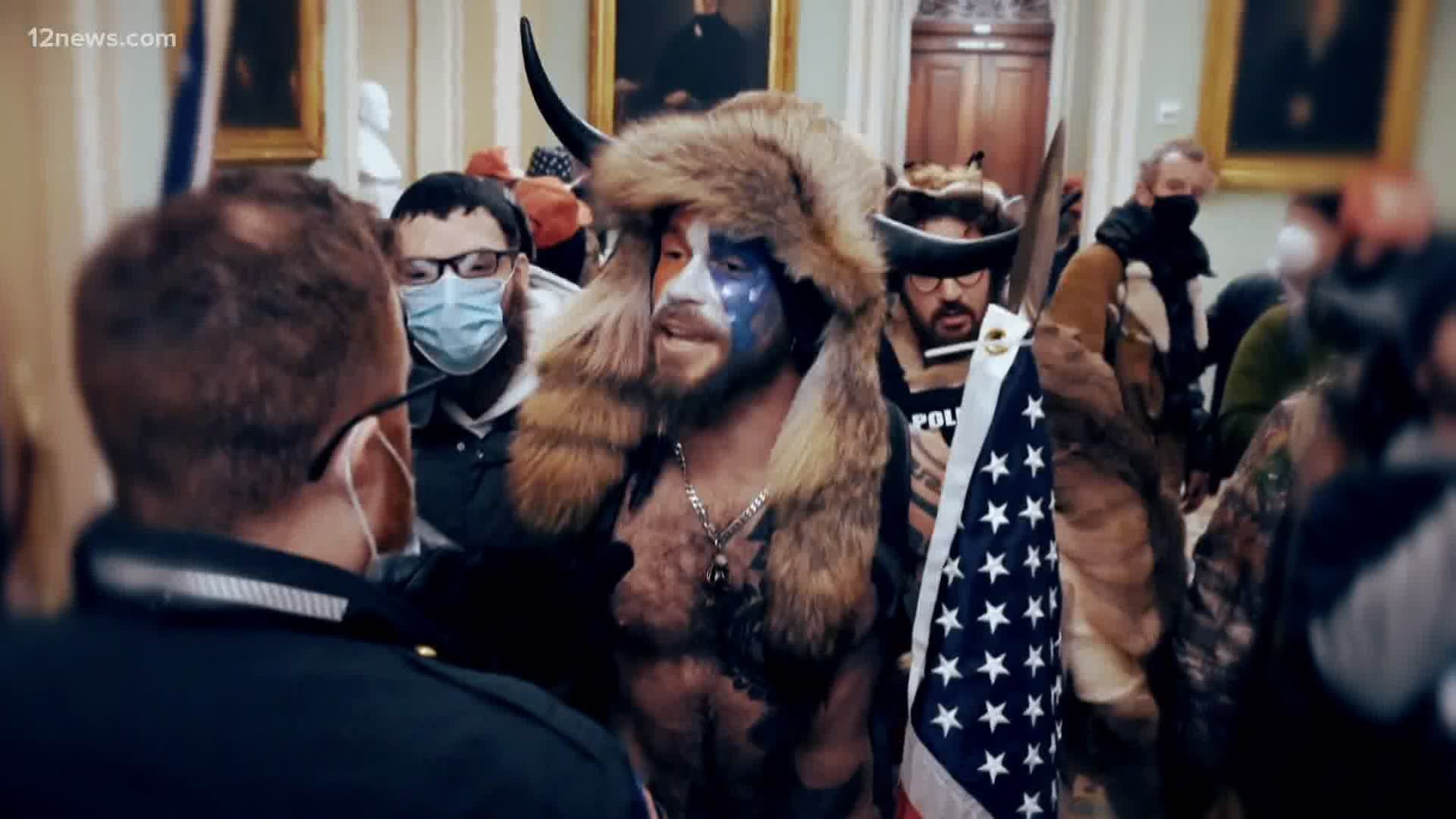 ARIZONA, USA — The Arizona man who was pictured wearing horns and face paint during the storming of the U.S. Capitol has been arrested, according to a press release from the U.S. Attorney's Office.

Jacob Anthony Chansley, also known as Jake Angeli, has been charged in federal court for his involvement in the riots and is in federal custody. Chansley surrendered himself to special agents at the FBI Phoenix Field Office Saturday morning.

The press release said Chansley and two others are now being prosecuted by the attorney's office and investigated by the FBI’s Washington Field Office and the United States Capitol Police.

Chansley, a resident of Phoenix, was charged with knowingly entering or remaining in any restricted building or grounds without lawful authority, and with violent entry and disorderly conduct on Capitol grounds, the press release said.

"It is alleged that Chansley was identified as the man seen in media coverage who entered the Capitol building dressed in horns, a bearskin headdress, red, white and blue face paint, shirtless, and tan pants," the press release said.

The 33-year-old self-described "QAnon Shaman" told FBI investigators he and other "patriots" from Arizona came to the Capitol at the request of President Donald Trump.

Chansley gloated about the insurrection to NBC News on his way back to Phoenix.

“The fact we had a bunch of our traitors in office hunker down, put on their gas masks and retreat into their underground bunker. I consider that a win,” he said.

"It shows he wanted these acts to happen... all of that will be used in the prosecution against him. He can’t claim he got caught up in the moment," said Iannarelli. “He can say any said to do this or do that, but he alone along with other people he was with decided to break into the Capitol.”

12 News has documented Chansley at numerous rallies, marches and events throughout the past year, ranging from Trump rallies to BLM marches. At these events, he claims to be part of QAnon and is usually shouting about conspiracy theories with a sign that says "Q Sent Me."

The Glendale Union High School District confirms a Jacob Chansley is a graduate of Moon Valley High School.  A yearbook shows he was in the class of 2006.

12 News tried to reach Chansley's family in Phoenix. One relative told 12 News over the phone that she was not surprised or worried that Angeli appears to be part of the Capitol unrest.

It’s not clear if he traveled alone to Washington, D.C., but GoFundMe confirms he started a fundraiser to help get him out there in December for the MAGA Million March.

A spokesperson says the fundraiser raised $10 and they shut it down Wednesday, saying it violated their terms of service after seeing him at the Capitol.

Three Men Charged in Connection with Events at U.S. Capitol
WASHINGTON - Three men were charged today in federal court in the District of Columbia in connection with the riots at the U.S. Capitol on Wednesday, Jan. 6, 2021. Jacob Anthony Chansley, a.k.a. Jake Angeli, of Arizona, was charged with knowingly entering or remaining in any restricted building or grounds without lawful authority, and with violent entry and disorderly conduct on Capitol grounds.