'Exit the vehicle or I'm going to rip you out': Phoenix Police release audio interview with trooper who shot Dion Johnson

Trooper George Cervantes told police he feared for his life when he shot Dion Johnson and was worried he'd be kicked into traffic. 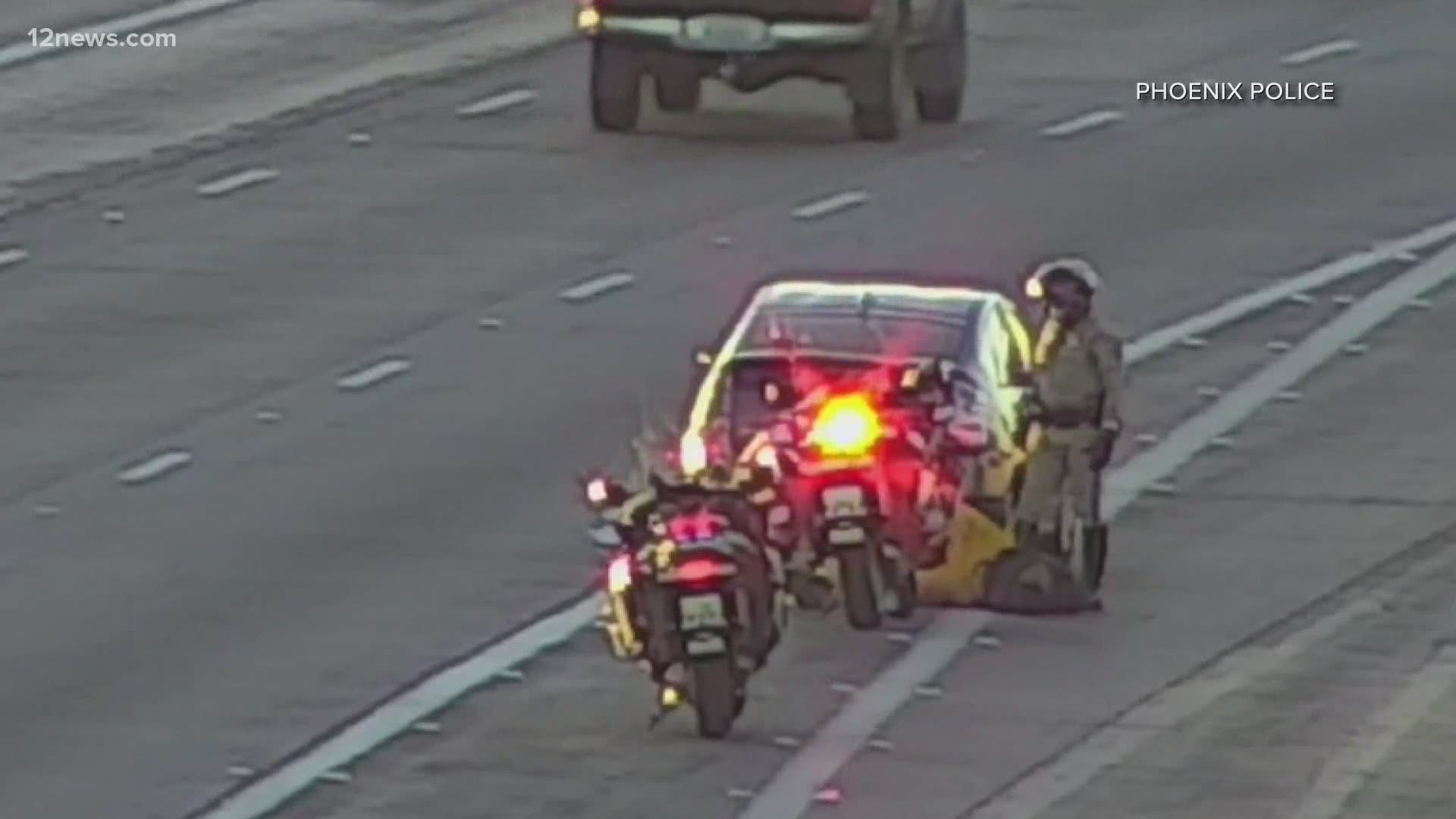 PHOENIX — It's been about seven weeks since Dion Johnson was shot and killed by a DPS trooper on Memorial Day.

Police say Johnson was passed out drunk in his car near Loop 101 and Tatum Boulevard when Trooper George Cervantes approached the vehicle and eventually shot Johnson.

This week, Phoenix PD released their investigation report along with audio interviews from witnesses and responding officers, including George Cervantes.

In the interview, Cervantes tells police he had just started his shift when he rode up on Johnson's vehicle, which was blocking the roadway. He says he approached the passenger side door first, saw Johnson passed out and smelled alcohol.  He says he saw a gun on the passenger seat, which he removed and took back to his motorcycle.

Cervantes says he then went back to remove the keys, which he said he couldn't do. He then says he went back to his motorcycle to wait for back up.

DPS radio traffic does not indicate Trooper Cervantes pulled a gun from the vehicle.  Another Trooper monitoring ADOT cameras says he started watching the ADOT live feed when Trooper Cervantes first got to the scene.  The Trooper says he saw Cervantes go from the passenger side right to the driver's side before the shooting and doesn't remember Cervantes going back to his motorcycle.

Cervantes says he goes to the driver's side of the door when he sees Johnson moving. He says his plan was to arrest Johnson for DUI.

“I said get out of the vehicle," Cervantes tells police.  "Looks at me. Just looked at me. I asked him again. 'Exit the vehicle.' Again, no response. Just stares at me. It’s like someone was standing behind me. I said exit the vehicle or I’m going to rip you out."

Cervantes says he was able to put a handcuff on Johnson's left hand but had trouble restraining his right hand as Johnson was moving away.  He says he's hanging on to the other part of the handcuff and Johnson is pulling him toward the vehicle.

"All I saw was feet," Cervantes says, explaining Johnson moved into a "coiled" position. "And I can see and hear traffic going by. And that’s the first time I feared for my life."

He tells police he was worried he'd get kicked into traffic.

Cervantes says he was able to pull his gun.

"At that moment I drew my gun and I said 'stop resisting or I’m going to shoot you."'

When he pulled the gun, Cervantes says Johnson relaxed. He thought Johnson was going to comply and says he started to put his gun back in the holster.  At that moment, he says Johnson grabbed at his vest and wrist with both of his hands, the left one still in a handcuff.

“With the leverage he had he sucked me in," Cervantes tells police. "Because I feel my right foot coming off the ground."

Cervantes says other situations where troopers had been hurt on the job flashed through his mind. He says he wasn't able to holster his gun and still had it in his hand.

"I manage to get my finger on the trigger. Hoping I’m pointed in the general direction and just squeeze one. Then he recoils back."

Cervantes told police he pulled out of the vehicle and fired another shot, although he didn't think that one hit Johnson. He assumed the first shot had, based on Johnson's reaction.

"I was in slow motion," Cervantes said.

At least two witnesses driving by said they saw the struggle before the shots were fired.

One witness, a Phoenix firefighter, described the fight as "intense."

"I couldn't tell if he was trying to pull the driver out or if the driver was pulling him," the firefighter said.

DPS radio traffic confirms Trooper Cervantes called in shots fired after he shot at Johnson. His backup was already on the way.

When the other responding trooper got to the scene, they finished putting Johnson in handcuffs and moved him to the ground. When they realized he'd been shot, they started applying first aid as other officers came in to help.

Soon after, Cervantes says he told dispatch the scene was clear and that Phoenix Fire could come in.

Johnson was taken to the hospital where he later died. Police records show he had drugs in his system like meth and THC. His blood alcohol level was .18.

Earlier this week DPS released that Cervantes had 13 complaints filed against him in his 15 years at DPS. Some complaints were unfounded, but for others, DPS took disciplinary action.

The interview with Cervantes is part of the report Phoenix PD sent to the Maricopa County Attorney's Office, which will decide whether or not to press charges against Cervantes.

You can listen to the full audio released by Phoenix PD here.