At a news conference outside of the police station on Sunday, Daniel's Mom Melissa Edmonds spoke out for the first time since he went missing. 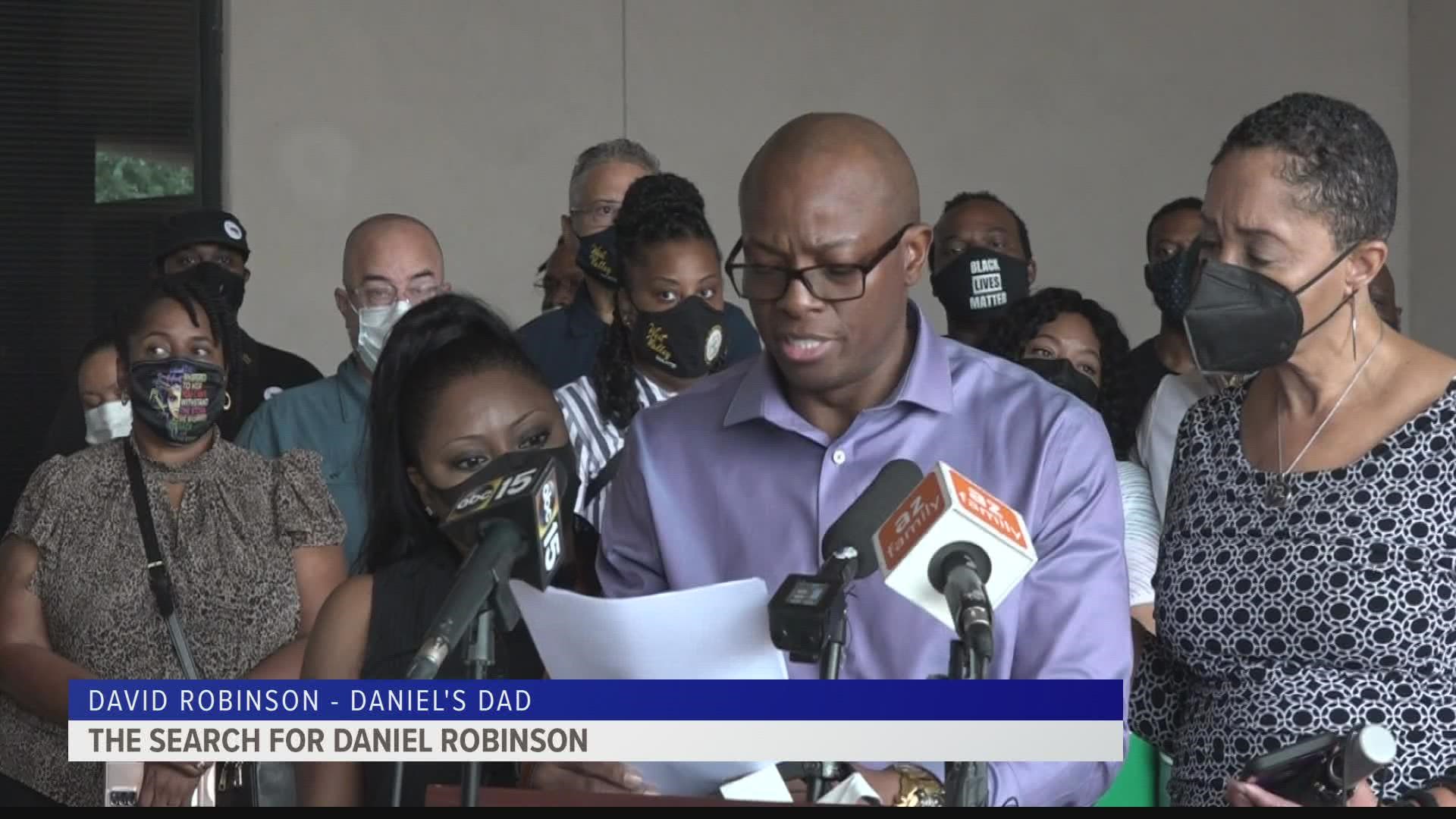 BUCKEYE, Ariz. — Three months after vanishing without a trace, Daniel Robinson’s family and supporters said Buckeye Police need to ramp up their efforts.

The missing geologist disappeared after leaving his Buckeye worksite back on June 23.

Buckeye Police have said they’ve followed up on all leads and evidence, but family, friends, and supporters are determined to find him.

At a news conference outside of the police station on Sunday, Daniel's mom Melissa Edmonds spoke out for the first time since he went missing.

She said she knows she'll see her son again.

Daniel’s mom speaking out for the first time. “He might be a man to you but he’s still my baby and we’re going to find him I know it in my heart.” @12News pic.twitter.com/GsX7bkiyOJ

"I want to be clear, we are not here to bash the Buckeye Police Department, but I’m here to state the facts as I know them."

He called out the cops for lack of urgency in the first 48 hours.

"I believe If they would’ve stepped up to the plate at the beginning I wouldn’t be standing here now."

"After waiting for Buckeye police department to do more searches for my son, I knew I had to do something because time was crucial," he said. "I couldn't go another day allowing the desert to separate me from being there for my son."

Buckeye police said that, prior to Daniel's Jeep being located, the department conducted a total of four ground searches and two aerial searches. They also conducted two more ground searches on July 21 after his Jeep was found.

David also pushed for Daniel's Jeep to be fingerprinted.

"I asked how can they be sure that my son was driving the vehicle without doing forensic work, the reply was that it was my son's vehicle, its obvious he was driving."

He later pointed to what he calls concerning conversations, like a detective suggesting his son wanted to vanish.

"He said 'maybe he wanted to be away from his family, to join a monastery and become a monk.'"

"The detective told him the vehicle rolled down the ravine," McGrath stated. "Well I looked at the photo and said that vehicle never rolled, it got to the bottom and tipped on its side that’s all it did."

He later got ahold of the Jeep for a deeper dive investigation.

"I can’t rule out foul play, so I don’t know how Buckeye can."

Buckeye Police said earlier this week that they're taking another look at the crash data in the coming days with an expert but still don’t suspect foul play.

BPD also released a partial police report on Thursday that documents all their investigative efforts since the beginning. It's more than 50 pages.

It includes call logs with Daniels' coworker who said he 'wasn't making sense' the day he disappeared.

David said he hasn’t looked at that report yet.

"I have heard rumors about that, but I haven’t read that report."

Who is Daniel Robinson?

His parents call him Danny. David said he can play multiple instruments.

"Daniel was born with one hand as many have come to find out but he never allowed that to hinder him. When Danny wanted to learn the French horn, he taught himself. When he wanted to play the trombone, he mastered it."

"When he wanted to play football, he played football. Danny would not let adversity stop him and that's why I can't give up on him."

His mom said Danny is her greatest hero.

"He taught me you can do anything."

Gabby Petito's investigation renewed interest in Daniel's case, but is race an issue?

"Often people of color have to go through hurdles and do not receive the urgency it takes to find their loved ones and as a result, often they go unheard," David said.

He added that it took months for Daniel's case to get national attention, whereas it took days in Gabby Petito's case.

"I vigorously sought national news coverage. I put in tweets, posted on Instagram, sent hundreds of emails, passed out posters," he continued. "Every case involving a missing person should be treated with the same care and urgency as the next. Sorrow, pain, and grief has no color."

Buckeye police said that race is not a factor in Daniel's investigation.

“Regardless of race, we have a father out there who is missing his son and looking for closure,” said assistant Chief Sanders. "All we know is Daniel drove away that day."

The search for Daniel Robinson

Family members have been desperate for answers ever since Daniel Robinson disappeared over the summer. Watch more on this story on YouTube. 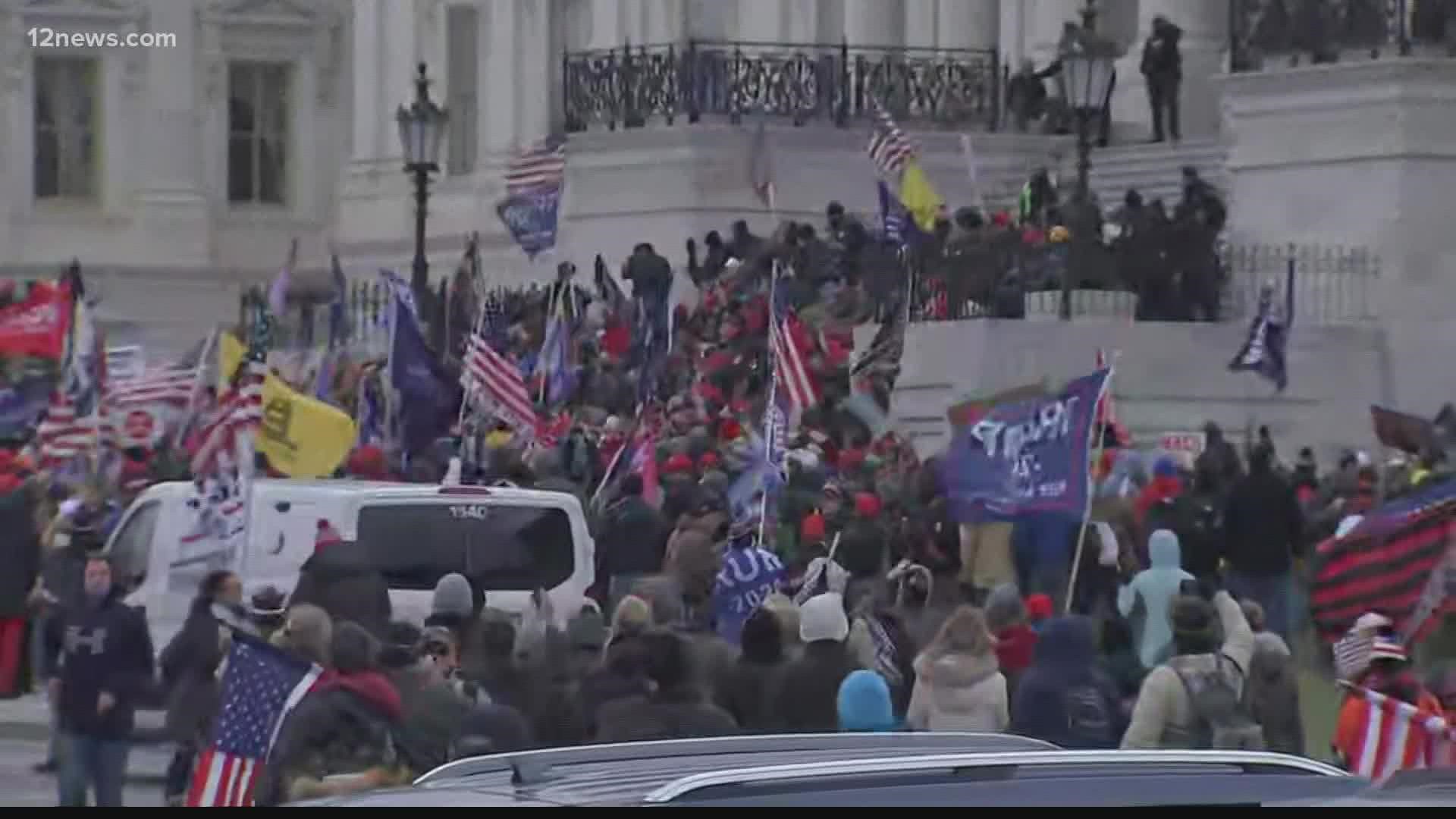