Fugitive red truck 'disappeared off the face of the earth,' Marshals put Barksdales on 15 Most Wanted

U.S. Marshal David Gonzales said the security guards are not suspects, but said "it sure seems suspicious" the Barksdales were able to escape in an area they knew. 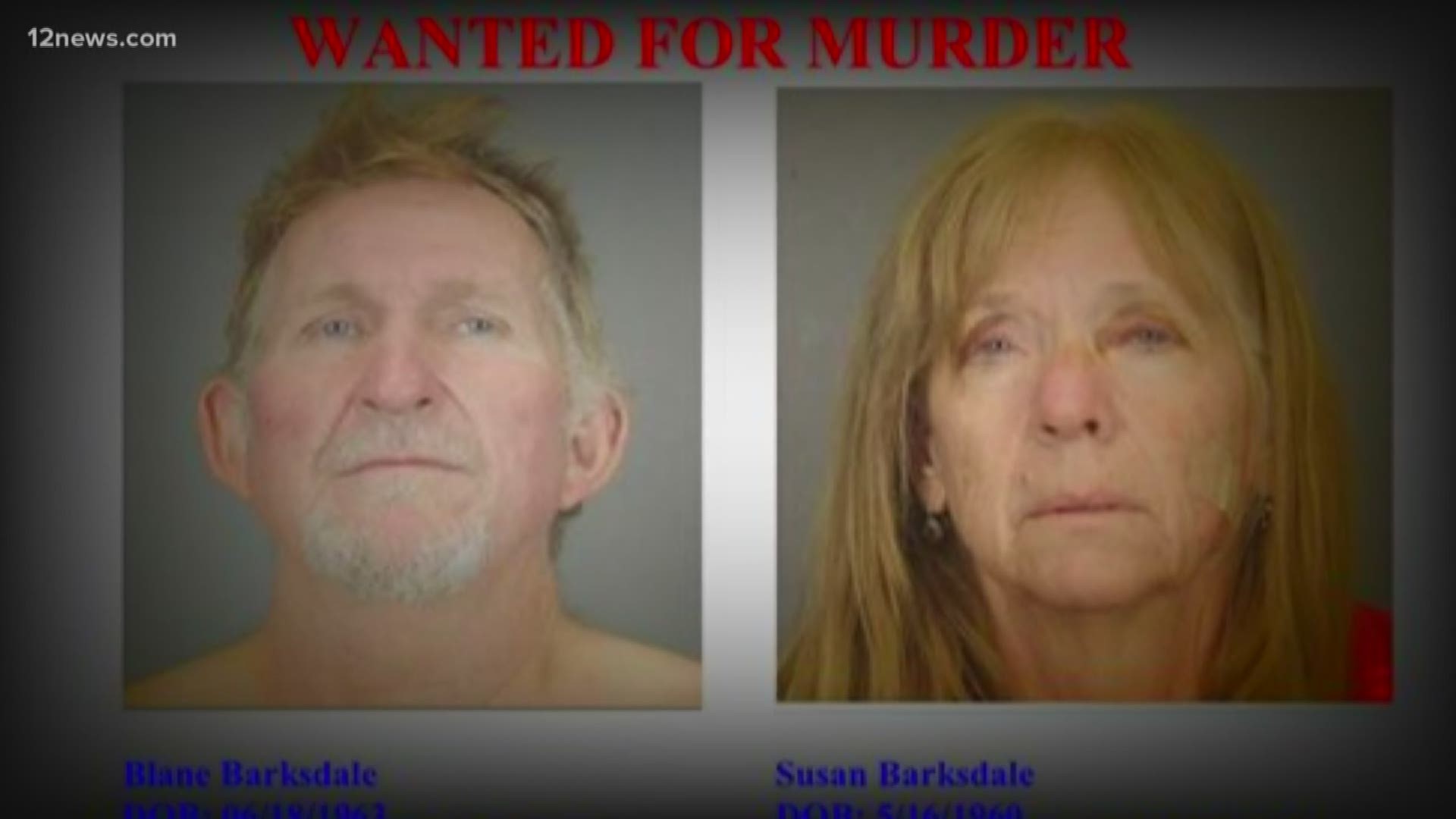 PHOENIX - Officials with the U.S. Marshals held a press conference Monday updating the public on the case involving the husband and wife that escaped a prison transport on Aug. 26 and remain on the run.

You may have seen the signs on Arizona highways in the past two weeks noting the car that Blane and Susan Barksdale were believed to be in, a red GMC Sierra pickup truck with the plate No. 127XTY. U.S. Marshal David Gonzales says that's no longer believed to be the case.

"It literally disappeared off the face of the earth and we would like to find it," Gonzales said about the truck. He said it's possible it could be buried or hiding in a barn somewhere.

Despite hundreds of calls with tips and possible sightings, the Barksdales and the truck have not been seen or located.

Now, the U.S. Marshals Service is upping the reward for information leading to 56-year-old Blane Barksdale's arrest to $25,000 and they have put him on the Marshals Top 15 Most Wanted list.

By putting him on the list, it makes the case an even higher priority for the Marshals on a national level, Gonzales said. Susan Barksdale, 59, is designated as a "major case" and reward leading to her capture is at $10,000.

The Barksdale's were being extradited from upstate New York, where they were arrested in May, as they're accused of killing a 72-year-old man in Tucson in April and stealing around 100 weapons from his home.

PREVIOUSLY: Are the escaped murder suspects still in Arizona? Authorities think so

Gonzales gave out further information Monday on how the Barksdales were able to escape. He said they overtook the prison transport van from two security guards, who were not law enforcement officers and were not armed.

Gonzales said there was a gun box in the van that had a gun in it, but it was not taken by the Barksdales or used by the security guards.

Another inmate was also in the van being transported to Pima County. The Barksdales locked the two guards and the other inmate in the back of the van and kidnapped the trio.

Eventually, they got the red GMC pickup from an acquaintance in the Vernon, Arizona, area and one of the Barksdale's drove the truck while the other drove the van.

They left the van stranded in a high desert area and left the three locked inside before they eventually were able to get on their phones and call for help.

Gonzales said many law enforcement agencies use private security companies to pick up and transport prisoners.

"I would have preferred if [Pima County] flew a couple deputy sheriffs out and flew [the Barksdales] back," Gonzales said.

In terms of the Barksdale's being transported together as a couple, Gonzales said that's not normal.

"I would say it's not typical but I think the Pima County Sheriff's Department will deal with those issues," he said.

As for whether the Marshals believe the security guards had anything to do with the escape, Gonzales said they are not suspects and that they are kidnapping victims.

However, "it sure seems suspicious that [the escape] wasn't that far from the area the Barksdale's do have acquaintances and were familiar with the area," Gonzales said in Monday's press conference.

Gonzales said he does not have information on whether this was a pre-planned escape but says the route taken by the prison transport has raised some questions.

Gonzales said it is not believed the Barksdale's have gotten into Mexico at this time. While he said they could be "anywhere in the world," he pointed to areas in northern Arizona including the Snowflake, Show Low, Apache County and Navajo County areas as possible places they could be hiding out.

He mentioned the couple's ties to the Aryan Brotherhood and white nationalists.

Gonzales reiterated that the Barksdales are considered armed and dangerous and should not be approached. Of the more than 100 weapons stolen in Tucson, law enforcement has only recovered a third of them, Gonzales said.