ASU found in 'serious violation' of the Clery Act, US Dept of Education strongly recommends reevaluate safety policies and procedures 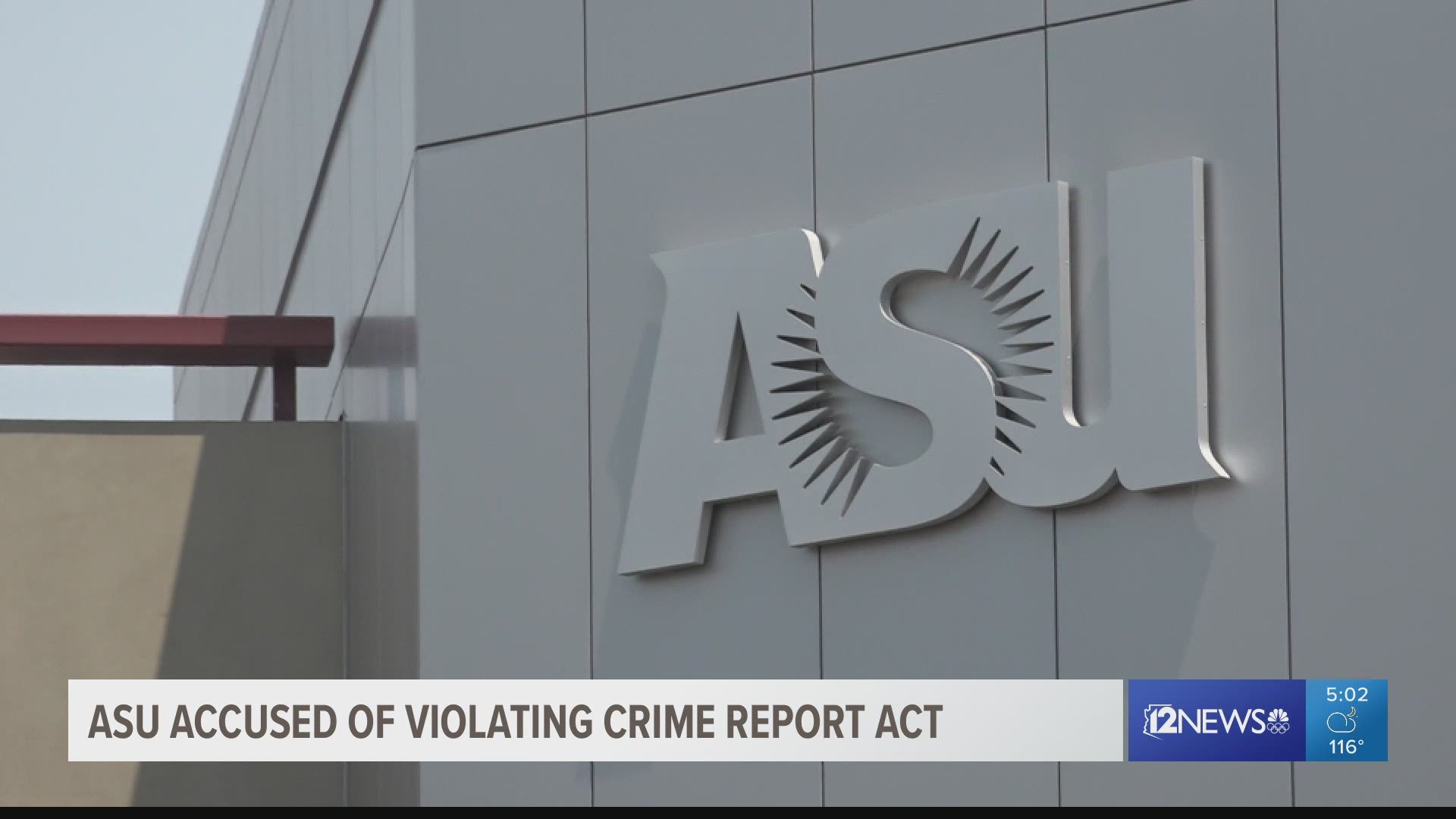 TEMPE, Ariz. — The U.S. Department of Education (DOE) found Arizona State University (ASU) in violation of the Clery Act after investigating a complaint filed on June 22, 2020.

The complaint was filed by victim's rights lawyer Laura Dunn on behalf of a client, who was allegedly raped on campus in February 2020.

What is the Clery Act?

The Clery Act is a federal law that aims to provide transparency surrounding college and university sexual assault, crime policy and statistics in order to protect victims of crime and those accused.

"I filed a federal complaint under the Clery Act with the Department of Education for a variety of violations," said Dunn. "Some of the top violations included failure to issue a timely warning about a sexual assault committed in a campus residence hall that may have posed a risk to other students and making sure there wasn't retaliation against a survivor when she sought me as her advisor."

The complaint also stated the university failed to conduct an impartial investigation and failed to provide her client documents in a timely manner, including allegations that ASU failed to explain policy and protocol.

Investigators of the alleged rape found insufficient evidence to refer the case to the Maricopa County Attorney's Office for prosecution.

"They [ASU] did not find on her behalf, and did not give her information for an appeal,” said Dunn.

Multiple violations found by the Clery Act Compliance and Campus Safety Operation at the U.S. Department of Education

An April 12, 2021 letter from DOE Senior Advisor James L. Moore III to ASU Senior Counsel Sara L. Trower informed the university that it was in "serious violations of the Clery Act," and strongly recommended that ASU officials "re-examine the University's campus safety policies and procedures on a regular basis."

The letter stated that ASU placed conditions on the alleged victim, including the signing of a non-disclosure agreement in order for them to fully participate or access information regarding the alleged rape investigation.

The DOE concluded that violated the Clery Act and that a university "cannot place conditions of any kind on a victim of an alleged sexual assault or their advisor, including the execution of a non-disclosure agreement."

“To have an institution say, 'Even if you went through something as horrible as a multi-hour rape and you were begging for help, we are not going to follow our procedures; we are not going to support justice for you and in fact, we are going to create barriers and obstruction,'" said Dunn. "That is harm; that is trauma."

The letter also concluded that ASU should have provided information to the victim and the accused in a written format at the same time.

The University has been communicating with the DOE since they received the April 12 letter.

“When we received the April 12 letter from DOE we immediately engaged with them. As a result of our discussion, there were two things they asked us to modify," said Vice President of Media Relations and Strategic Communications Katie Paquet. “They asked that we deliver concurrently to the parties involved the final determination.”

Previously, the university would schedule in-person notifications closer together to provide resources to alleged victims if desired.

According to Paquet, the DOE asked the university to establish a more robust written rationale for the final determination of an alleged sexual assault investigation.

ASU will confirm these modifications in a response to the DOE on June 25.

“We are continuously looking at our policies and practices and making changes as needed as well as getting feedback from the community,” said Parquet. "Our process now will be to ensure that delivery of the final determination happens concurrently but that we are also still offering and providing support and resources to the individuals involved."

ASU has been under the microscope of sexual assault for years

In 2016 the DOE was investigating three separate assault cases in Tempe.

According to the university's 2020 Annual Security and Fire Safety Report, there were 27 rapes reported across ASU's four Valley campuses. That number is possibly higher as two out of three sexual assaults are not reported to the police.

For those who have been assaulted or fear they will be, these resources can help. If you are in immediate danger, call 911.