Nathan Wayne Entrekin was arrested Thursday at his Cottonwood home. Videos he narrated for his mother are a key part of evidence in the criminal complaint. 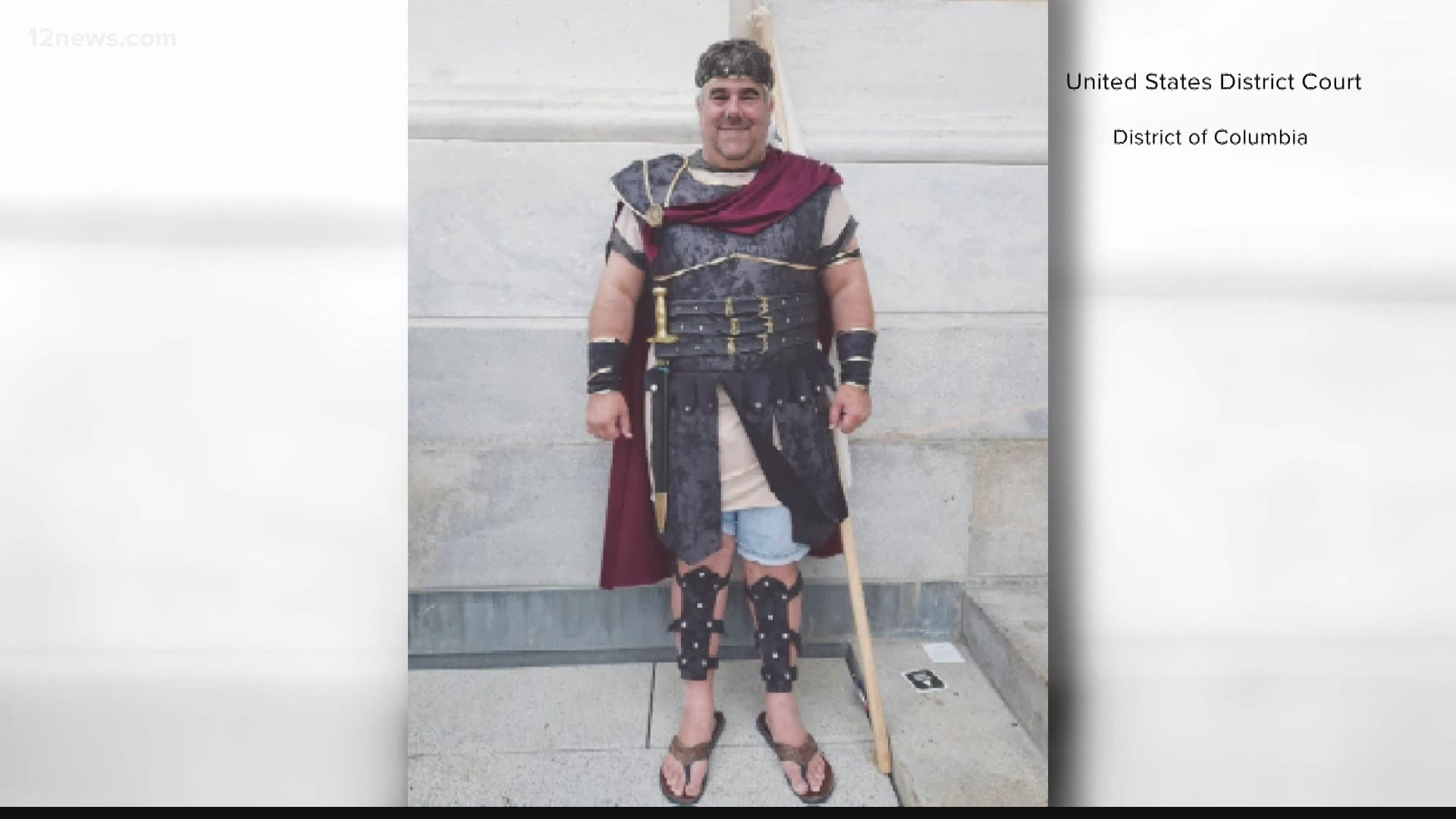 PHOENIX — A Cottonwood man is facing federal charges after he allegedly stormed the U.S. Capitol on Jan. 6 dressed as "Captain Moroni," a military commander in the Book of Mormon who led a fight for freedom, according to a criminal complaint filed in Federal Court in Washington, D.C.

Nathan Wayne Entrekin, 48, was arrested Thursday by the FBI at the home he shares with his mother in Cottonwood, southwest of Sedona, according to an arrest warrant.

Entrekin is scheduled to appear in Federal Court in Flagstaff at 10 a.m. Tuesday.

The allegations against Entrekin are based in large part on cell-phone videos he narrated for his mother's benefit during the Capitol insurrection, as well as images and another video on social media.

"Wow, Mom. I wish you were here with me. It's really exciting in here," Entrekin says in one of the videos, according to the complaint, filed on Wednesday.

Images of Entrekin show he was dressed in a gladiator costume, which an FBI agent said was identical to a plus-size costume sold online.

The complaint links to a YouTube video of an interview with Entrekin on the Capitol Terrace. "I just want to say I'm here for freedom and peace, liberty and love and happiness," Entrekin said.

Entrekin faces two charges: one for knowingly entering or remaining in a restricted building or grounds without lawful authority, and the other for violent entry and disorderly conduct in either house of Congress. He could face up to a year in prison.

Entrekin is the second costumed Arizonan arrested in the Jan. 6 insurrection.

Jacob Chansley, the rioter in a horned hat who was known as the "QAnon Shaman," is locked up in a federal prison in Colorado while awaiting a mental health evaluation.

More than 500 people have been charged in the Capitol riot. Five people lost their lives.

This isn't the first time that a Trump acolyte has drawn on the story of Captain Moroni.

Lee later conceded that his comparison was "perhaps awkward."

Public records show Entrekin has been working as a notary. He has lived in the Phoenix area and Tucson over the last several years, working at various jobs.

The complaint says a tipster identified Entrekin to the FBI on Jan. 11, based on publicly available photographs.

Video of Entrekin inside the Capitol was widely viewed. Images of him were hashtagged #CaesarNoSalad.

The FBI interviewed him at his Cottonwood home on Feb. 2.

Entrekin allowed the FBI to review the videos on his cell phone, according to the complaint.

He told investigators that "the calls of former president Donald Trump-inspired him to attend the (Stop the Steal) rally."

Entrekin said he drove the 2,200 miles from Cottonwood to Washington, D.C., by himself.

Book of Mormon Prominent in Complaint

The FBI agent who signed the complaint goes on at length to explain the significance of Captain Moroni in the Book of Mormon, a sacred text in the Church of Jesus Christ of Latter-day Saints:

"Within the Book of Mormon, at or around the year 73-72 B.C. (by the book's own timeline), Cpt. Moroni sought to defend the liberties of his people—the Nephites—from another group—the Amalickiahites—that wanted to overthrow democracy and install a king."

Video and images show Entrekin hoisting a home-made, white-cloth flag with hand-written scripture from the Book of Mormon:

"In memory of our God, our religion, and freedom, and our peace, our wives, and our children. Alma 46:12"

The complaint also explains that, according to the scripture, Captain Moroni wrote the same words on his coat as a response to the threat of democracy.