Erica Alvarez said that as soon as her 1-year-old son Justin was taken by doctors, she dropped to her knees to pray. 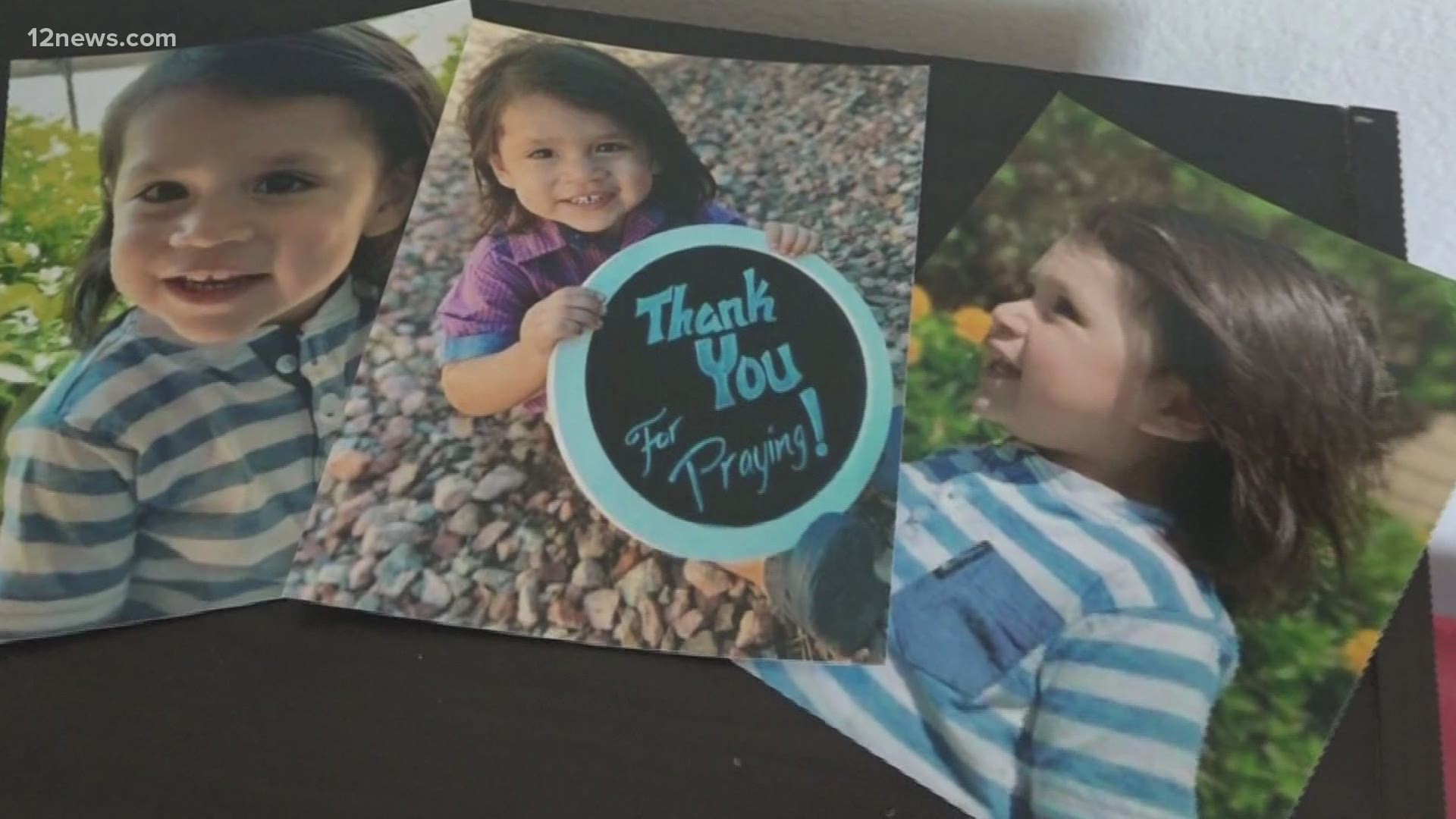 PHOENIX — All it took was a matter of seconds and a door left slightly open. Before Erica Alvarez knew it, she was performing CPR on her 22-month old son.

“We ran out and we saw him face down into the pool," Alvarez said.

In April, Alvarez said she and her youngest son, Justin Alvarez, were sitting inside their Phoenix home. Justin Alvarez's siblings and father went outside to their backyard. It started raining so everyone came back inside. Nobody realized it then but their back sliding door didn't completely close.

Shortly after, Erica Alvarez didn't see Justin Alvarez, so she started looking. She and her boyfriend immediately ran outside, finding Justin Alvarez face down in their pool. He had pried open the sliding door, made it through their small gate and into the pool.

Justin Alvarez's father pulled him out and Erica Alvarez began performing CPR as a neighbor, who jumped over the fence to help, called 911.

“The amount of carbon dioxide in his blood which is an indicator of how well they’re breathing was off the charts high, meaning he was not ventilating at all," said Dr. Rahul Chawla, a pediatric critical care and emergency room physician who helped Justin when he arrived at Banner Thunderbird.

Chawla said he sees drowning patients all too often. In cases like Justin Alvarez's, the outcome is usually grim.

“I never tell a parent to give up hope but I told them in our experience children that are like this do not survive and do not do well," Chawla said.

Erica Alvarez said that as soon as her son was taken by doctors, she dropped to her knees to pray.

“I literally walked to the side and got on my hands and knees and prayed," Erica Alvarez said.

In a matter of days, Justin Alvarez made a full recovery in the hospital and was sent home. Chawla said that, had Erica Alvarez not known CPR and had the temperature of the pool been warmer, the boy likely would not have survived.

“The joy and the relief. And the fact that he fully recovered with no brain damage or anything like that," Erica Alvarez said. “He’s still the same little boy that we had before.”

Since that dark day, Erica Alvarez has installed special alarms in her house so if a door is left open, a loud noise rings out until the door shuts. Thanks to donations from a fire department, her family is installing a large fence around her pool.

As Arizonans move into the warm summer months, Erica Alvarez hopes families use her gut wrenching close call as a lesson.

“You just don’t think it’s going to happen to you," Erica Alvarez said.

The Drowning Prevention Coalition of Arizona has a long list of programs to prevent drownings across the state. Programs are available for adults and children.

You can find a list of their programs here:

Tips offered by Arizona's Department of Health Services include adult supervision, a four-sided isolation fence with a self-closing gate and ensuring kids can swim by age 8.