Residents believe a neighbor moved away, leaving their chickens behind to fend for themselves. 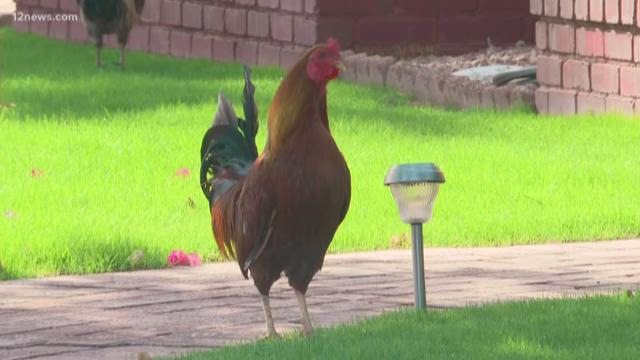 Why did the chicken cross the road?

Some residents in the neighborhood near 32nd Street and Earll Drive in Phoenix are asking much more than that. They want to know how to get rid of the chickens and roosters roaming free in their neighborhood.

The free-range birds have been a fixture in the neighborhood for years. It's believed a neighbor moved away, leaving their chickens behind to fend for themselves. Thanks to the help of some residents who feed them, they've survived and have been breeding ever since.

“I don’t like the chickens,” said William McGuire, who has lived in the neighborhood for the past 40 years. “They’re messy. They poop on everything and they’re destructive and very noisy.”

Hens are allowed in the city of Phoenix, only on 10,000 square feet of property. Roosters are not allowed because they get noisy with their crowing.

Since the fowl have no one claiming them, they are considered feral and not the responsibility of the city.

Maricopa County Animal Care and Control, Arizona Game and Fish and the Arizona Department of Agriculture say the free-range birds are out of their jurisdictions.

While some consider the birds a nuisance, many in the neighborhood enjoy seeing their feathered neighbors.