CHILDREN IN CRISIS: Number of children dying from abuse or neglect known to CPS agencies is increasing

Christopher and Brooklyn Velasquez's lives were cut tremendously short after they were left in a car for hours. Their family says DCS needs to change. 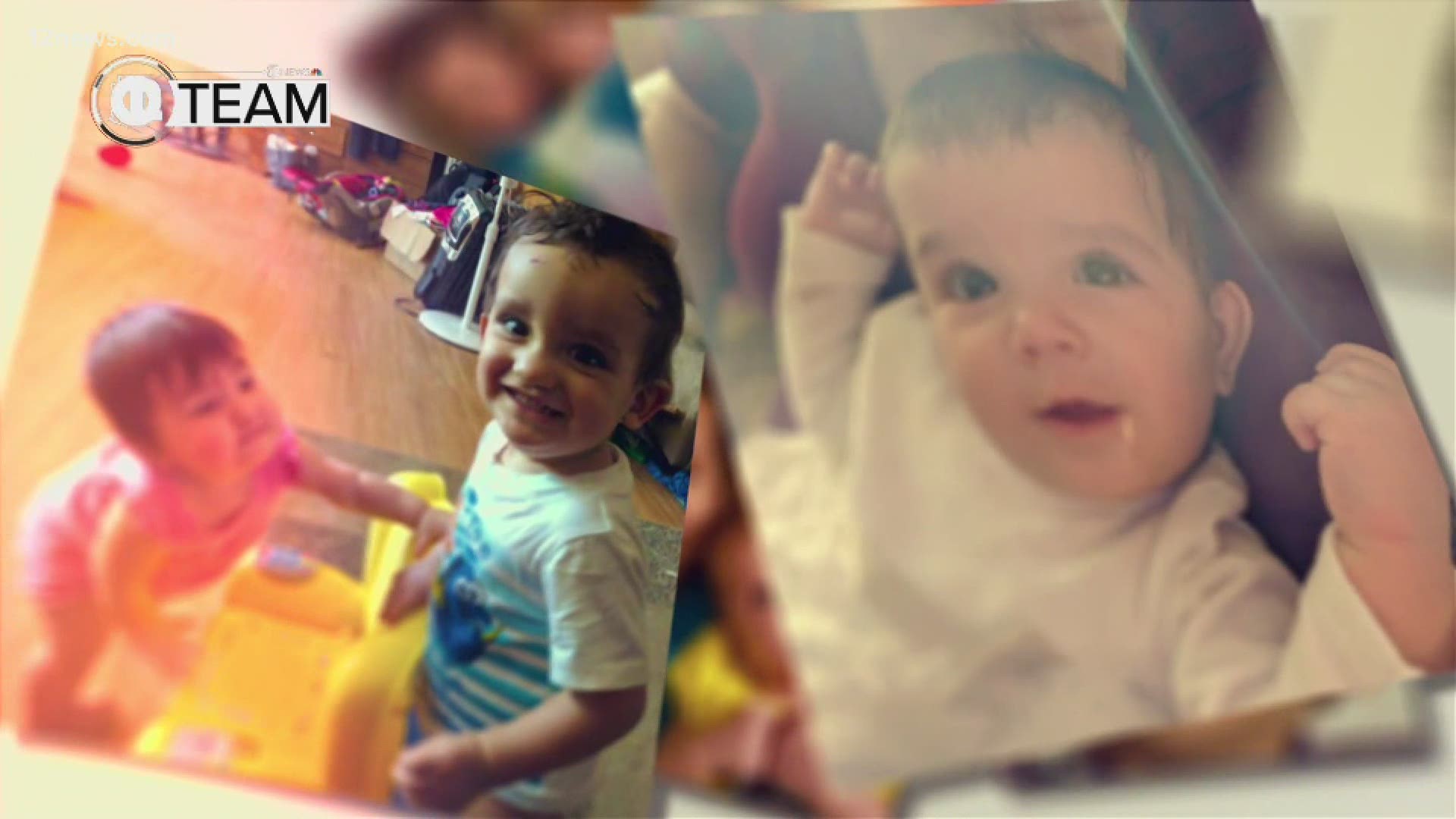 PHOENIX — The little boy loved to dance. Rambunctious. A bit of a troublemaker, his uncle recalls. His younger sister, just 9 months old, had barely gotten a chance to know the world, or for the world to know her.

"I remember when all the presents were in my old room at my grandparents’ house,” Vincent Velasquez said, recalling a past Christmas with his nephew, Christopher.

“I was taking a nap in there and I hear just a weird noise and I look up and he's like scouring through all the presents."

"And then Brooklyn, she wasn't walking yet, so she was always just kind of hanging out like someone was always holding her," Vincent said.

"That's pretty sad. She never even got to learn how to walk."

On March 26, 2018, Christopher and Brooklyn died from exposure after they were left in a hot car for several hours. Their family said their deaths should have been prevented.

Their deaths mark two of at least 165 children the Department of Child Safety confirmed died from abuse and neglect since 2015.

The 12 News I-Team analyzed five years of DCS child fatality reports finding that the department charged with investigating abuse or neglect had prior involvement in nearly half of cases where children later died.

Christopher and Brooklyn's fatality reports are below.

'Something bad is going to happen'

Siblings Vincent and Amber Velasquez worried their niece and nephew were in danger since Christopher was an infant. They said the children’s mother, Brittany Velasquez, was not providing proper care.

“She had baby Christopher and he wasn’t being fed," Amber said.

“People have even seen her apartment. It was just flooded with diapers like you couldn’t walk," Vincent and Amber said.

"The kids were constantly sick."

Vincent and Amber said their sister, Brittany, struggled with mental illness and that they and other family members reported their concerns to the Superior Police Department and the Arizona Department of Child Safety.

“Probably everyone in the whole family has called," Vincent said. “I was like can I just take them because something bad is gonna happen. And they’re like well that’s kidnapping and you know you’ll get in trouble.”

Just weeks before Christopher and Brooklyn's deaths, Vincent made what would be his final call to DCS.

“I just remember saying she’s gonna do something stupid and these kids are gonna end up dead," Vincent said.

On March 26, 2018, Amber and Vincent weren't together, but they were both woken up in the middle of the night with phone calls.

"Obviously I was extremely sad and distraught but it was like just anger, you know? And almost not surprised like I knew it was going to happen," Vincent said.

Christopher and Brooklyn, still strapped into their car seats, died from exposure after Brittany left them in the car in Superior, Arizona, for hours.

Since that dark day, the young children were laid to rest and Brittany Velasquez was sentenced to 20 years in prison.

The Department of Child Safety refused multiple requests for an interview with the I-Team for this story, but did release a public statement shortly after the children died, saying in part the department “could only make decisions based on the available evidence" and that "the department acted in good faith based on the information they received."

The statement indicated the department had two prior reports involving Brittany Velasquez and her children. They say there were no signs of abuse or neglect.

Read the full statement below.

Amber and Vincent said they and their loved ones called DCS five to ten times.

“You know how helpless it feels?” Vincent said.

When 12 News asked if any DCS policies have been changed since the deaths of Christopher and Brooklyn, Spokesman Darren DaRonco said, "We continually monitor and assess our practices and policies so we can provide the services that best meet a family’s needs."

The I-Team’s analysis of the state’s reports and police reports in cases that did not result in a fatality further show that Christopher and Brooklyn’s case is not the first of its kind.

The 2019 case involving Machelle Hobson of Maricopa, known as 'YouTube Mom,' gained national attention. Hobson was accused of torturing her seven adopted children while forcing them to perform in videos for her lucrative YouTube channel.

The disturbing allegations against Hobson include pepper-spraying her children, pinching their genitals, and locking them in a closet for days at a time without food, water or access to a bathroom.

Documents show DCS investigated Hobson nine times between 2011 and 2017. Most claims, including claims of maltreatment, were unsubstantiated.

In one case, the report says the DCS caseworker laughed at the allegation and did not take it seriously.

Hobson's health deteriorated while in custody and eight months after her arrest before ever going to trial, she died.

The I-Team’s analysis of 165 fatality reports since 2015 show that in the nearly half that DCS did record prior involvement with the family – the department repeatedly found prior allegations of neglect or abuse “unsubstantiated.”

One extreme case resulted in a 6-year-old child dying in Flagstaff in 2020. His sibling nearly died from malnutrition the report shows.

DCS showed that in the eight prior investigations dating back to 1998, the allegations of neglect or abuse were 'unsubstantiated'.

The I-Team’s analysis found that in 46 child death cases since 2015, DCS reported two or more prior reports involving the family. In six cases, the department was involved five or more times, resulting in 39 prior investigations.

DCS public information officer Darren DaRonco wrote in an email to the I-Team.

“DCS’s top priority is ensuring the safety of children. After the Department receives a report, a DCS specialist conducts a thorough investigation of the evidence to determine if the child is a victim of abuse or neglect.

‘We are failing to protect and keep them safe. We can do better’

The I-Team’s analysis of DCS reports showed that, like Christopher and Brooklyn, two-thirds of children the department confirmed died from abuse or neglect were under three years of age.

The Arizona Child Fatality Review Board stated in the 2020 report that all child deaths from abuse or neglect are preventable.

“We can’t bring these children back but we can put measures in place to prevent tragedies like this from happening going forward," said Darcy Olsen, the founder and CEO of Generation Justice.

Gen Justice is an organization that works to protect children from abuse and neglect and also examines the child protection system.

“The body count doesn’t lie. And in the last ten years instead of having a reduction in the number of fatalities, we’ve had an increase," Olsen said.

The numbers are heading in the wrong direction.

According to Arizona's Annual Child Fatality review reports, since 2010, more and more deaths of children caused by abuse or neglect are happening in families with prior CPS involvement.

The most recent report, examining the year 2019, shows that two out of every three children who died from maltreatment slipped through the cracks.

“When I was growing up I always thought that children who die from abuse are children that no one knew about," Olsen said. "And then come to find out when you do the research a majority of the children are known to the agencies. And we are failing to protect and keep them safe. We can do better.”

Like most experts in her field, Olsen knows the job of a DCS investigator is impossibly challenging.

Olsen says there are reforms that can improve the process and it starts with more transparency.

“It should all be all hands on deck to figure out what went wrong so that the next child lives. And that’s the reaction we want to see from the government agencies who are responsible for safeguarding these children," Olsen said.

"Number two, we need a red flag law. We need some black and white rules about when you have to move a child to safety."

Today, Vincent and Amber remember their niece and nephew through photos and videos.

Amber and Vincent know in their hearts they did everything they could to try and save the children.

To this day, they believe the system needs to change.

“I think it’s kind of our duty to at least try something because if it saves one kid’s life then it’s worth it," Vincent said.