The woman who allegedly injected the lip filler cannot be found, according to police. 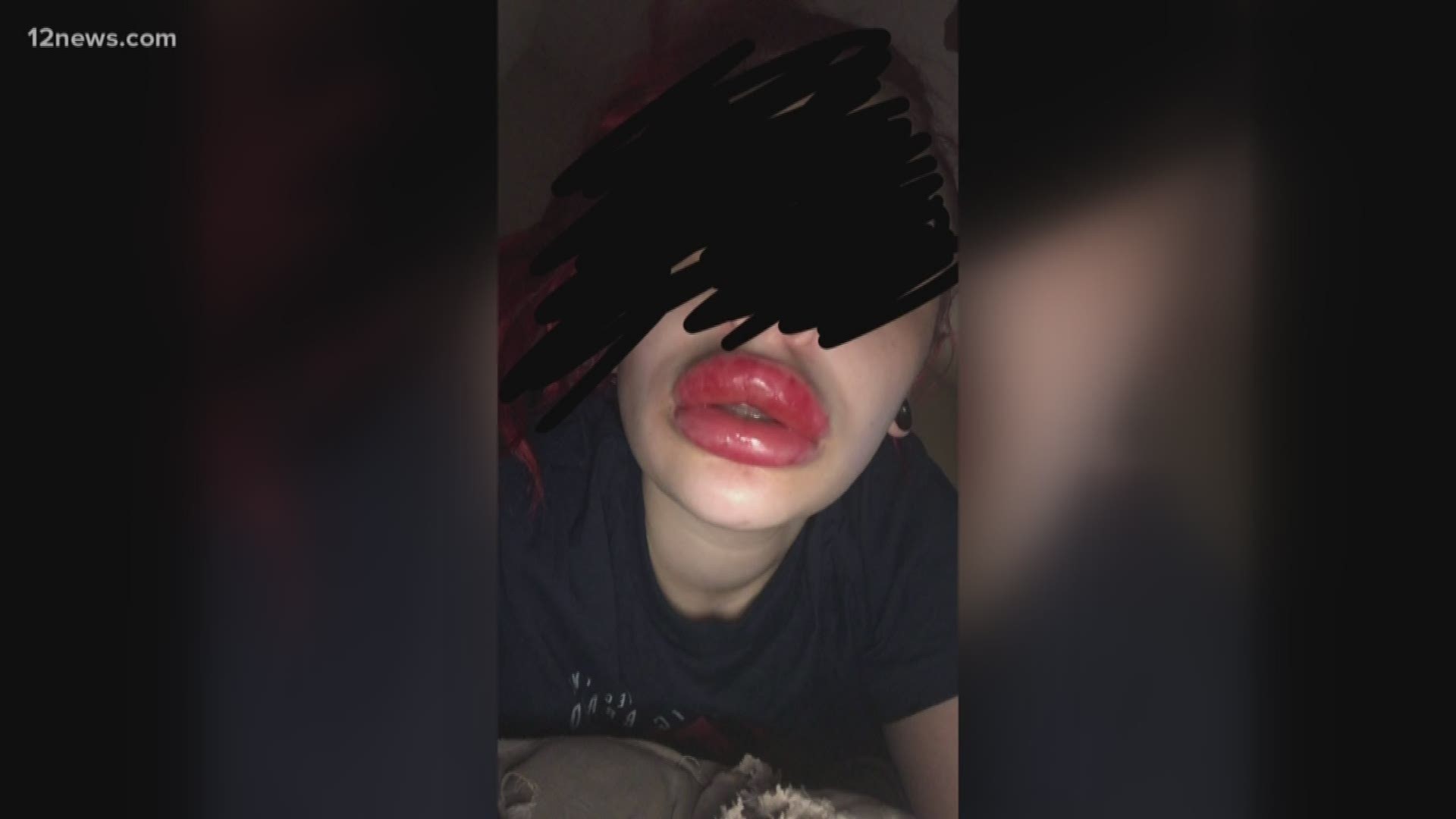 WARNING: The following article contains photos and descriptions that some may find graphic

Garaventa, 19, said her best friend, among many others, went to a woman’s home in Maricopa for lip injections that cost much less than normal. Her friend had been going since November of 2018.

“Every time she went, her lips looked amazing, like flawless,” Garaventa said.

Typically, someone may have to pay $500 or more for one milliliter of lip filler to be injected. But, Garaventa says this woman in Maricopa charged just $80 to do it out of her home.

“She has a really high clientele, a lot of people go to her,” she said.

So, Garaventa, admittedly acting on impulse with a desire to have plump lips, decided she would go get her lips done as well, for the first time. Garaventa says she thought this woman was certified to give lip injections and had a permit, but said she would later learn that was not the case.

"It was literally the worst pain I’ve felt from anything"

On Aug. 3, Garaventa went to the home of the woman. She said it was just a room in the house where the woman did the injections along with her sister.

“It was just like a massage table that you laid on,” Garaventa said.

However, Garaventa said that the woman told her she was a registered nurse. Garaventa thought the environment was sterile.

Garaventa said right when she began receiving the injections, she felt like something was wrong.

“When she was pushing [the filler] in, it almost felt like my lips wanted to reject it like it was being forced in,” she said.

Garaventa said the woman told her the filler was Probcel, a type of hyaluronic acid. But, Probcel is illegal here in the states. She would later learn this batch of lip filler was different than what her best friend and others had been getting done since last year.

Garaventa says she was in immediate pain and spent the entire car ride home crying.

“I expected pain but not as bad as it was,” she said. “It was literally the worst pain I’ve felt from anything.”

Later that day, she said her top lip had swelled to the point where it was touching the tip of her nose.

Garaventa was in communication with the woman who injected her lips that day over text message, trying to understand if what was happening to her was normal. The woman told her it was just swelling and it was completely normal since she had never gotten her lips done before.

"There would be blood all over my mouth"

She said that night she went to Banner Boswell Medical Center, where she was given pain medication and steroids and was told the swelling should go down.

By Monday, the pain did not go down and neither did the swelling. She went back to Boswell, then her primary care physician on Tuesday where she received medications.

“I went the rest of the week just taking my medicine and hoping it would go down,” Garaventa said. “Every single day I would wake up and there would be blood all over my mouth. I would have to squeeze pus from all the spots on my face, the infection was getting worse even on the medicine.”

On Saturday, Aug. 10, just a week after her injections, she said she went to Banner Thunderbird Medical Center, where she was kept for nearly a week. Garaventa was on IV and antibiotics every day and underwent two surgeries.

“It helped but it still didn’t all come out so they also put in a dissolvent in my lips to dissolve the filler and that also helped a lot but there’s still stuff in my lips so I’m going to have to follow up and probably get another dissolvent put in,” she said.

Meanwhile, Garaventa was not the only one this happened to.

"Nobody really knows what’s in our lips"

Garaventa says the woman changed her phone number and deleted her Facebook page, where she would advertise the services.

Garaventa says they learned from the woman that the batch of lip filler injected in them was different than previous batches, allegedly with different ingredients.

Garaventa said she is in a group chat with about 15 others, who all plan to file police reports.

“What do you mean there’s no crime?"

When Garaventa herself called the Maricopa Police Department, she said she was initially told there could be no report filed for what happened to her.

“She was telling me that basically since we knew what we were doing and were going to a house, we should’ve known and said there was no crime there,” Garaventa said.

Since the Maricopa Police Department has verified they are investigating the claims.

Now, nearly 20 days later, Garaventa is still waiting for her lips to heal and says she has medical bills through the roof. She warns anyone that wants something done like this cosmetically.

“Remain natural without any type of cosmetic surgery, be happy with your normal self because seriously I thought that my lips were never going to be normal again and I still am worried about that,” she said.

The Maricopa Police Department tells 12 News that three women so far have come forward with allegations against this woman, who they did not identify.

12 News is choosing not to identify that person at this time. Police believe the woman may be using different aliases.

“We can’t locate the person that is supposedly doing these injections,” Maricopa PD told 12 News. “So, the investigation continues, we are looking at licensing and permits for this person currently. If anyone has gone to this person they can call us.”

If you plan to receive any medical or cosmetic operation, it’s important to know what drugs are approved and not approved in the United States and what their ingredients and warnings are. To search names and types of drugs before undergoing a procedure, click here.

Here’s how to check if your provider is a licensed nurse.

If you have been affected by this same situation or a similar situation, contact the 12 News I-Team below