The device uses a system of filters to pull carbon dioxide from the atmosphere and trap it for storage, kind of like a garbage truck for the air. 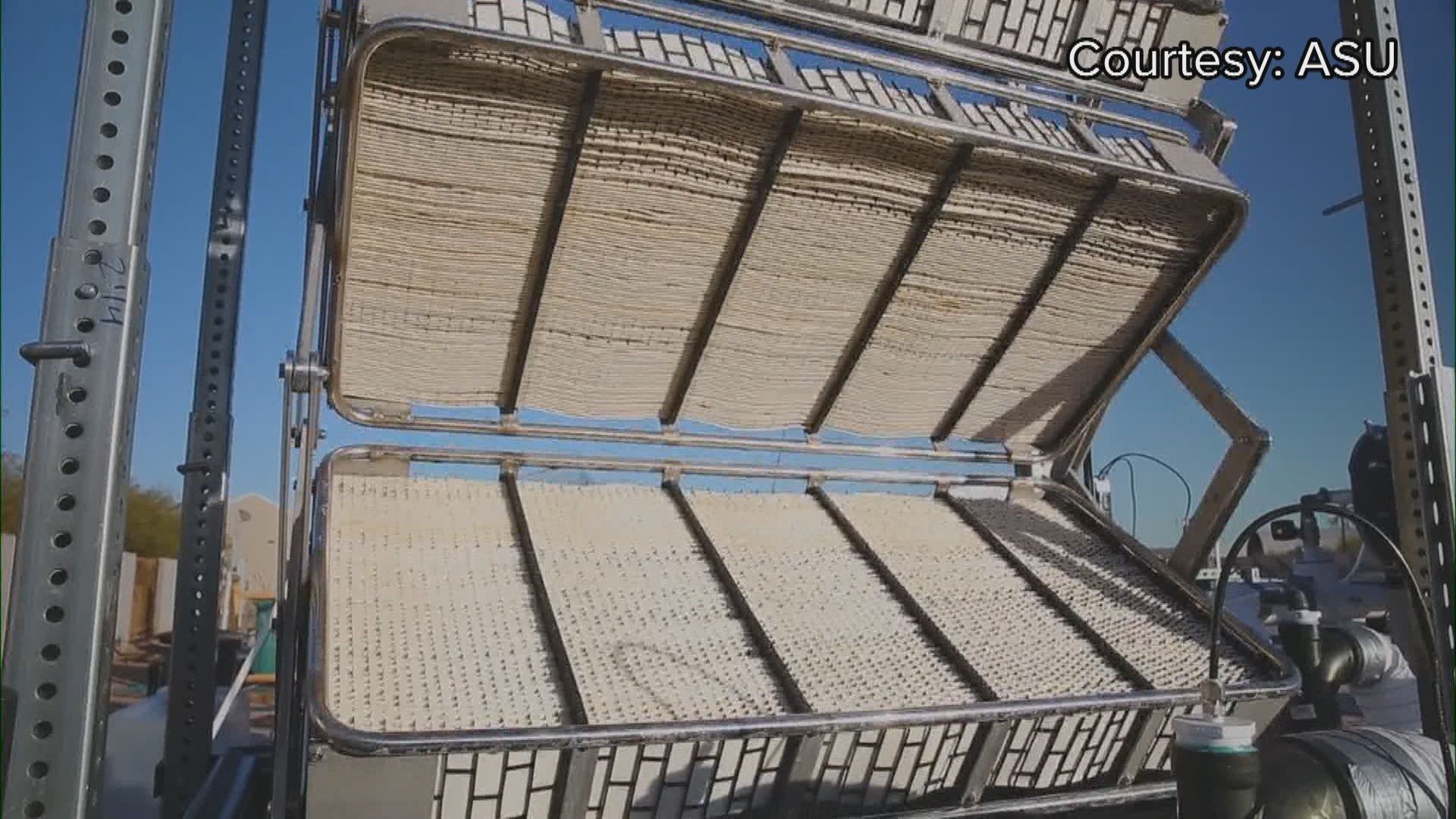 TEMPE, Ariz. — An Arizona State University researcher who studies carbon dioxide emissions has invented a potential game-changer in green technology. His carbon capture machine operates like a garbage truck for the air.

Lackner’s device uses a system of filters to pull carbon dioxide from the atmosphere and trap it for storage. Various methods of carbon capture storage (CCS) have been examined by the United Nations and environmental organizations for several years as a tool to combat climate change.

Lackner is encouraged by the results, saying the machine has the capacity to pull about one ton of CO2 from the atmosphere per day.

Once captured, the concentrated CO2 could hypothetically be stored underground or be used to spur plant growth in greenhouses.

In the same way municipalities and sanitation companies collect and recycle waste, Lackner envisions a future when the collection and storage of CO2 becomes a sanitation industry.

“Ultimately we have to figure out a business on the trillion-dollar-a-year scale, worldwide, to collect all the CO2 back and balance the carbon books,” Lackner said.

There’s little disagreement among the world’s scientific organizations that climate-warming trends over the last century are “extremely likely” caused by human activities. Factories, deforestation and vehicles pump billions of tons of heat-trapping CO2 into the atmosphere annually.

A 2018 report by the United Nations concludes that major changes on a global scale are needed over the next decade to mitigate the risks of floods, drought, extreme heat and poverty for hundreds of millions of people.

Lackner estimates that adequately addressing greenhouse gas trends would require manufacturing around a hundred million carbon capture machines, each the size of a shipping container.

By comparison, the world’s automobile companies produce 80 million cars and trucks a year. In other words, Lackner says, it would be possible over the course of a few years.

“Initially, it’s not cheap, because no one has done it,” Lackner said. “But I think in the long term it gets cheap.”

Last year the United Nations Intergovernmental Panel on Climate Change mapped out four pathways to keep global warming at a maximum of 1.5C. The implementation of carbon capture technology was included in all four proposals.

In Lackner’s view, carbon capture science allows modern countries to maintain their economies, which are driven by energy use, while cleaning the air at the same time.

To those who doubt the need for such drastic measures, Lackner compares the CO2 problem to another environmental dilemma America faced in the early 19th century: raw sewage.

Governments and municipalities initially resisted the idea of building costly underground tunnels to safely dispose of it.

“People argued sewage doesn’t really hurt anything, 'A little bit of slop hasn’t done anything. Besides, you can’t prove it causes disease,'” Lackner said. “But eventually, we got convinced.”

Before joining ASU in 2014, Lackner worked at Columbia University and the Department of Energy Los Alamos National Laboratory.