A protester arrested Monday at the Arizona Capitol after a raucous hearing on the botched presidential primary vote was booked on a felony charge, because a safety pin in his pocket injured a state trooper. 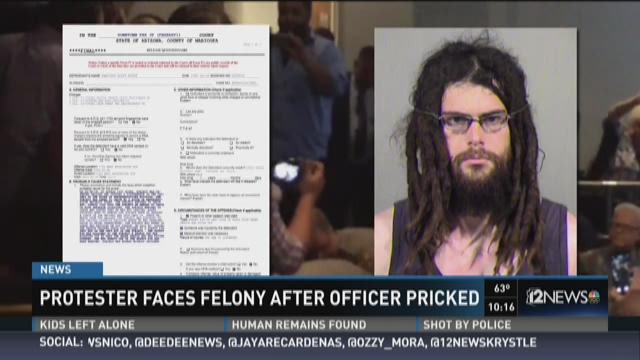 PHOENIX - A protester arrested Monday at the Arizona Capitol after a raucous hearing on the botched presidential primary vote was booked on a felony charge, because a safety pin in his pocket injured a state trooper.

Jonathan McRae, 23, of Paulden, was arrested after he and other protesters were asked to leave the visitors gallery in the House of Representatives.

Several protesters had moved to the gallery after the hearing ended in another part of the building, in anticipation of a House vote on a bill loosening restrictions on "dark money."

McRae was "observed yelling and causing a disturbance," according to court documents. McRae was asked to leave four times, then grabbed a chair when Arizona Department of Public Safety troopers moved in to remove him, the documents say.

Before troopers searched McRae, he was asked if "there was anything on his person," according to the documents. McRae said "no."

But when a trooper searched McRae, he was pricked by a safety pin that was open and pointing out from McRae's shorts. The safety cover had been removed from the safety pin, documents say.

McRae faces a felony charge of aggravated assault on an officer, and two misdemeanors, resisting arrest and criminal trespassing.

His next court hearing is scheduled or April 11.

The special hearing on Arizona's primary earlier Monday was attended by about 200 people in the packed hearing room, with spillover crowds outside the doors.

Several speakers berated and sometimes yelled at Maricopa County Recorder Helen Purcell for the hours-long lines during the primary vote March 22. Purcell sat stoically in the front row for much of the 3 1/2-hour hearing

The public testimony was often passionate, with participants booing and cheering as speakers made their points.