The American Civil Liberties Union is taking over an Arizona woman's federal lawsuit against Republican Congressman Paul Gosar of Flagstaff, in a case that could break new legal ground on whether elected officials can block constituents on social media.

Attorneys with the ACLU of Arizona are now representing Morgaine, as well as another plaintiff, Paul Hamilton, of Indivisible Prescott, in the lawsuit, filed in Federal Court in Phoenix.

"We took up this case because public officials who intentionally open up their social media for public conversation can't stop people from joining in because of the views they express on the topics at hand," said ACLU attorney Darrell Hill via email.

Morgaine has been a harsh critic of Gosar's on social media and at his Kingman office.

"There are people who roll their eyes at me for what I'm doing," Morgaine said in an interview, "but this gives me more than validation. It gives my lawsuit credibility."

The undecided legal question of whether elected officials can shut out voters in the new public space of social media has reached all the way to the White House.

President Donald Trump has been sued by the Knight First Amendment Institute at Columbia University, for violating the First Amendment rights of seven people by blocking them on Twitter.

The White House claims Trump's @RealDonaldTrump account is a personal one, not government related.

Gosar initially responded to Morgaine's complaints about being blocked with a snarky Facebook post saying, "So you're upset I blocked you on Facebook. Here's why I don't care, a three-part series."

But one month after Morgaine filed her lawsuit, Gosar opened his page to all commenters. That came after he suggested in a Vice interview that Morgaine had threatened his safety.

A Gosar spokesman said the ACLU suit is pointless.

"The suit itself is moot and likely intended to harass and annoy," said Gosar's Chief of Staff Thomas Van Flein said via email.

"The Congressman has very clear rules against hate speech, spamming, ad hominem attacks and profanity," Van Flein continued. "Users who were blocked were in violation of our policies. We expect our policies to be upheld by the court." 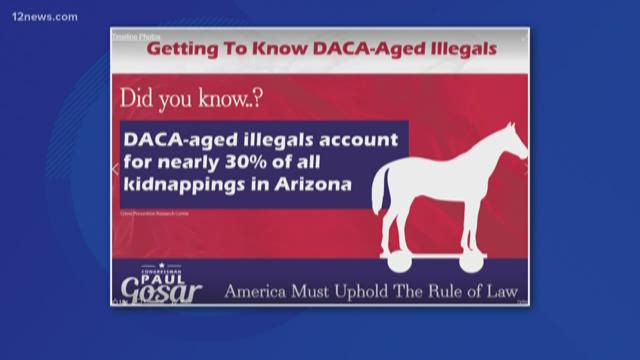