President Donald Trump promised to build a border wall that stretched 1,000 miles along the U.S.-Mexico border. So far, only 453 miles have been completed. 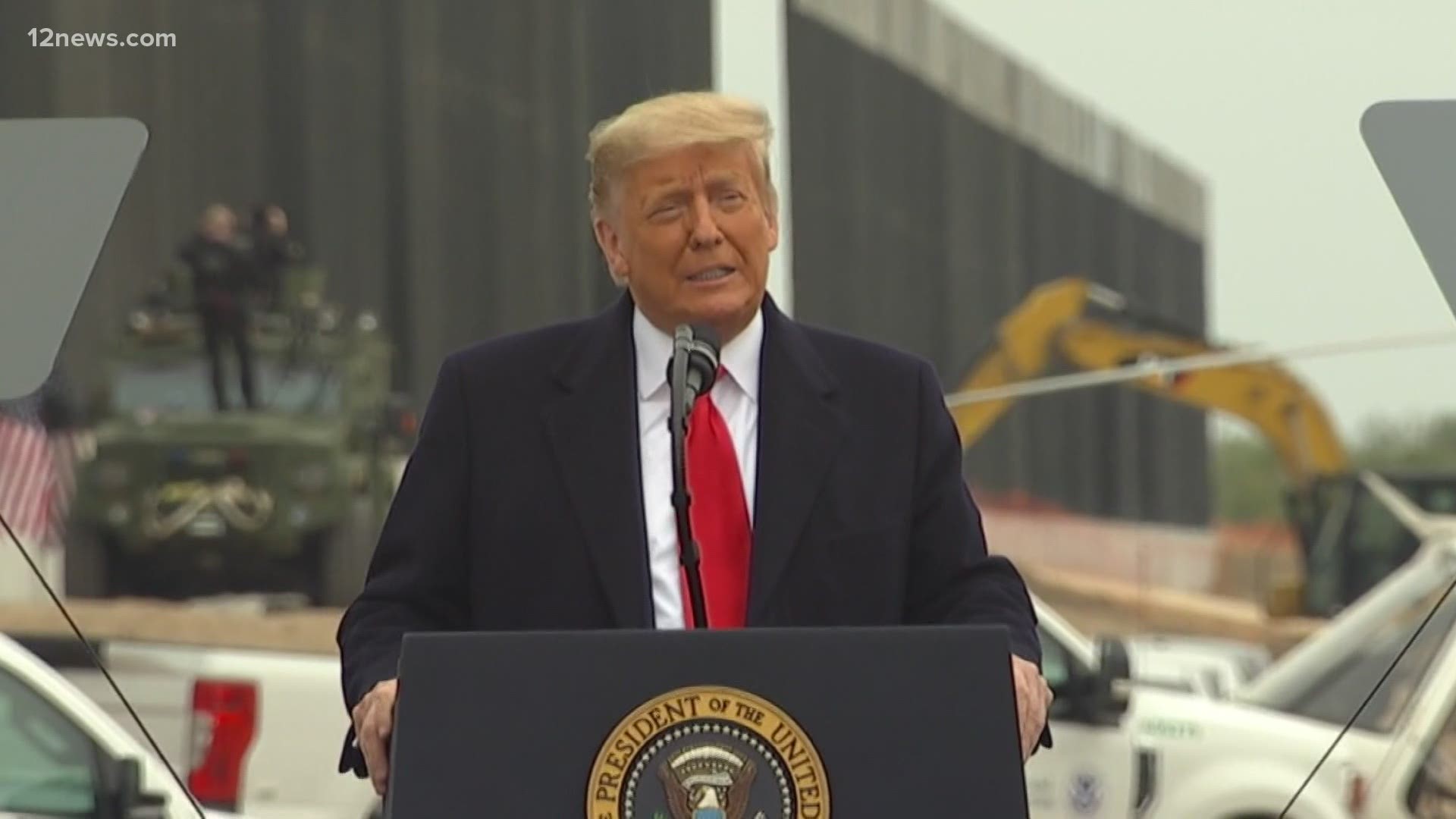 PHOENIX — Almost a week after the attack on the nation’s capital, President Donald Trump made his first public appearance in Texas, where he touted construction of the border wall along the US-Mexico border.

About 450 miles have been built or reconstructed so far, about half of the 1,000 miles the president promised to build throughout his term.

“They said it couldn’t be done, and we got it done,” Trump said at a press conference at the 450th-mile completion mark in Alamo, Texas on Tuesday, where he surveyed a half-mile stretch of the new border wall.

“Unlike those who came before me, I kept my promises.”

The president began his promise of a border wall assuring Mexico would pay for its construction, but the project only took off after he declared a national emergency at the border and redirected money from the Defense Department to build it.

U.S. Customs and Border Protection released new data on the status of the border wall construction efforts Tuesday. Thus far, 453 miles of the 738 miles that were funded have been completed or reconstructed.

President-elect Joe Biden has said he will halt all wall construction when he takes office, despite the legal and costly ramifications that would entail. He has also said he will drop all pending lawsuits to seize land for border construction.

Currently, the longest stretch of the border wall that has been completed is in Arizona with 225 miles, where 20 miles are still under construction. Texas has only 51 miles completed, but 177 miles are currently being worked on.

“In less than 10 days, they’ll have the 14 miles on our land completed,” James Johnson said.

For over 100 years, five generations of Johnson’s family have grown produce and raised cattle in New Mexico’s southwest border.

Their company, Carzalia Valley Produce, employs over 400 seasonal workers, where over 60% live in Mexico and legally cross the border to work on their farm.

Johnson says throughout the years, his family has requested the last three administrations an expansion to the border fence, as he says they’d been robbed on multiple occasions.

When the wood and wire fence was replaced by the steel-beam barrier structure, he says things have gotten better.

But the immigration advocates have a different sentiment on the matter, who say the wall should have never been built in the first place.

“It’s inhumane, costly, un-American and hast a lot of implications on the environment”, said Soulmaz Taghavi, an immigration attorney.

“It would help both countries to have a streamline with fair and humane policy, so we are just counting down the day.”

Some Democratic lawmakers have joined Biden’s take on the border wall,

Representative Raul Grijalva issued this statement to 12 News on the matter.

“From the desecration of sacred Native American sites to rampant environmental destruction, Trump’s vanity wall project has caused immeasurable harm to the borderlands,” said Rep. Grijalva. “With Trump gone, we must halt all current construction and revoke the waiver authorities that have allowed this disastrous project to proceed. As the Biden Administration crafts its border policy, I urge them to listen to the diverse voices of the borderlands that have been ignored for the past four years. This includes bringing border communities, tribes, environmentalists, and wildlife advocates to the table to craft a border policy that is truly representative of the priorities of the people of the borderlands.”

Read the full government report on the progress of the border wall below: