Data shows an increase of APS customers whose power was shut off because of unpaid bills in 2018, the first full year the controversial rate hike was implemented. 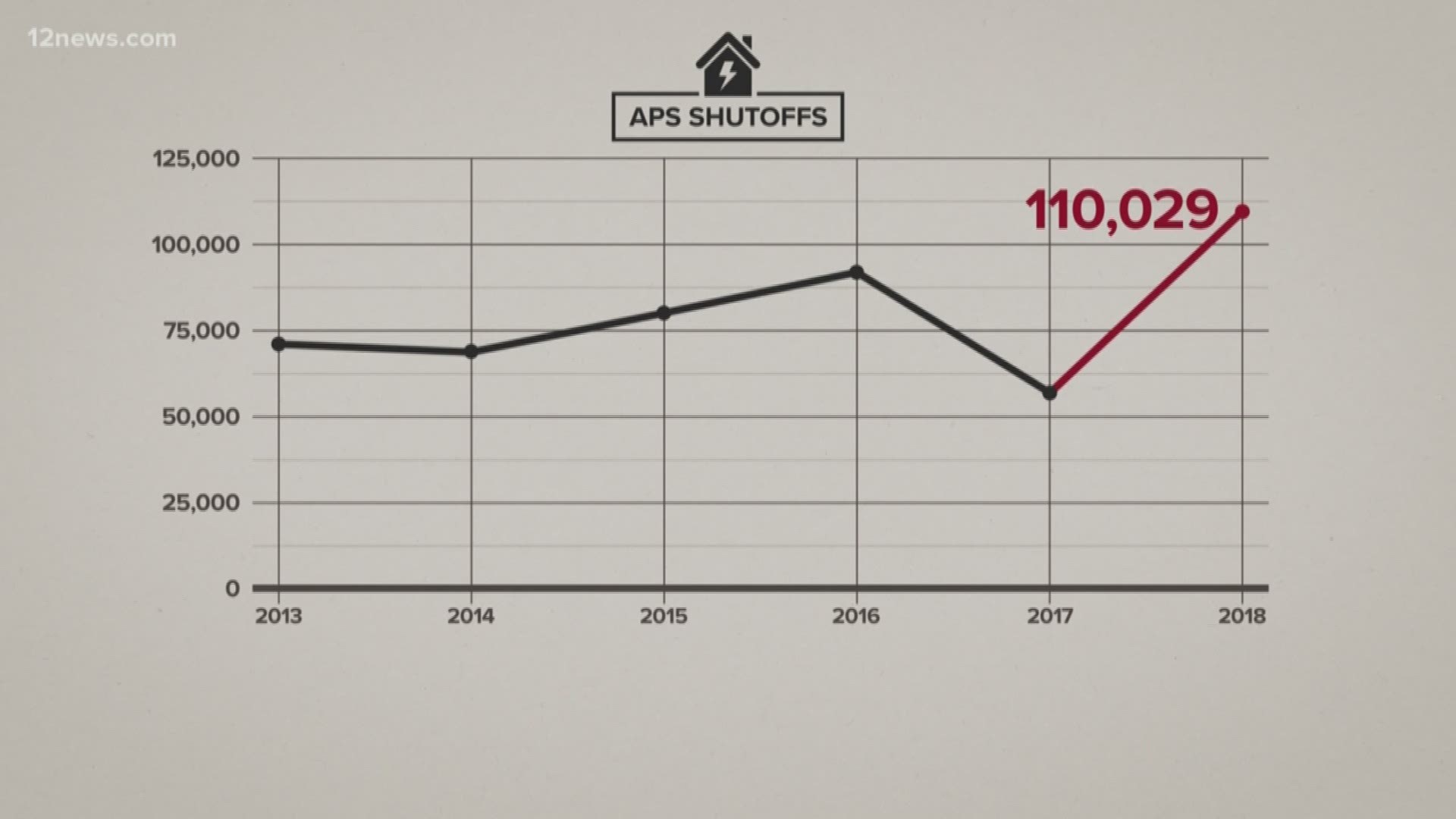 PHOENIX — The state’s largest power company shut off electricity service to one in ten customers last year, a rate that was higher for the company than any year since at least 2013.

The residential and business customers who had their power shut-off “with notice” because of unpaid bills amounted to more than 110,000.

The statistical spike came during the first full year that a new controversial rate hike was implemented by APS, and the number represents a 100% increase compared to 2017.

A spokesperson for APS said the data does not reflect higher electricity rates, but rather a ripple effect caused by APS’s decision to suspend the enforcement of disconnections during periods of 2017 while a new customer billing system was being implemented.

“As a result, the 2017 numbers are lower than normal and the 2018 are a little higher, reflecting the disconnections that would have occurred in 2017 but for the suspension of the disconnection policy,” said Jill Hanks, a communications consultant for APS.

There were 55,792 customers whose service was shut-off in 2017. During that year, there were zero shut-offs during March and April and just 430 in May, a result of a shut-off freeze.

The monthly shut-off numbers surged again into the thousands in the summer months and fall, peaking to 11,541 in October 2017.

The 2018 report of 110,029 customers who lost service represents a 50% increase of the annual average of the previous five years.

Two Arizona Corporation Commissioners who spoke with 12 News said they planned to look into the matter.

“The increase in the number of customers who have had their services canceled calls for significant scrutiny from the commission," said Commissioner Justin Olson.

Commissioner Bob Burns said he initially had the impression the termination data also included mere warnings and not actual shut-offs.

"I may have to look a little closer. The information I was given by my policy advisor sounded reasonable, and I didn't have any reason to question it. But now I do, so I'll have to take another run," Burns said.

APS CEO Don Brandt declined to answer questions about the shut-offs. Brandt has labeled himself as “the spokesperson” for APS but has repeatedly denied media requests in recent years to discuss the company’s practices and ethics.

Hanks said the average APS customer’s bill has dropped by $9 since January 2018, a reason why higher rates did not cause a surge in shut-offs. She said the company makes numerous efforts to prevent shut-offs.

“We go above and beyond what is required to notice customers, and have resources available,” said Hanks in an emailed statement.

On May 15, Champion received APS’s annual utility report from the commission. That is when she discovered that the Arizona Corporation Commission staff decided to omit the “shutoffs/disconnect” category entirely from the 2018 annual template.

“There is a glaring omission of shut-off and termination data,” Champion said. “It raised a red flag for a couple of reasons. One, because I’m paying attention to heat-related deaths. Two, we just had the 2017 rate hike tied to APS and I was curious to see how that data would correlate as well.”

The shut-off data had previously been part of the commission’s annual utility report dating back to at least 2013.

Champion suggests the omission may have been a move by someone on the corporation commission staff to shield APS from scrutiny. The omission meant the data was not available during a hearing just last week when Champion made a final plea to the commission to take a fresh look at a previously approved rate-hike.

“I think there’s more to it,” Champion said. “Those numbers should be of interest to staff and commissioners as well as the general public, and they should be easy to access.”

The commission provided 2018 APS shut-off data to Champion and 12 News on Monday in response to public records requests.

A spokesperson for the commission says it's merely a coincidence the omission came the same year APS had an unusually high number of shut-offs. She said it had nothing to do with Champion’s public efforts to scrutinize APS.

According to Ward, the decision to omit shut-off data came at the direction of utilities department director Elijah Abinah. Abinah declined to answer questions about his reasoning for the omission, citing a potential conflict because there are open cases involving APS before the commission.

Ward said Abinah determined the shut-off data simply wasn't useful in the annual report and therefore deleted it as part of a larger "streamlining" effort of the annual reports. When asked why the staff would take initiative on their own to “streamline” information in the annual report, Ward said it stems from a 2016 directive from commissioners to streamline water utilities data.

“It started with water company reports, and as a utility staff, they decided they could streamline electric reports,” Ward said.

12 News asked Ward if Abinah can point to other categories of data that have been omitted in the 2018 report to show that “shut-off” data wasn’t the only target for omission. As of Thursday afternoon, 12 News had not received a response.

For Champion, who has spent her time and money attempting to expose alleged conflicts of interest between politicians, corporation commission employees and APS, this latest development is another sign that her fight is not over.

“Given everything I'm seeing in peeling back layer after layer of a very smelly onion, yes, I think they are far too cozy. I don't think the public's interest is being taken seriously," Champion said.

We want to know if you've had your power shut off by APS or if you have any other tips about this story. You can submit a tip to our I-Team by filling out the form below.