Businesses are starting to rebound from the pandemic, but it's been a struggle finding people hire. 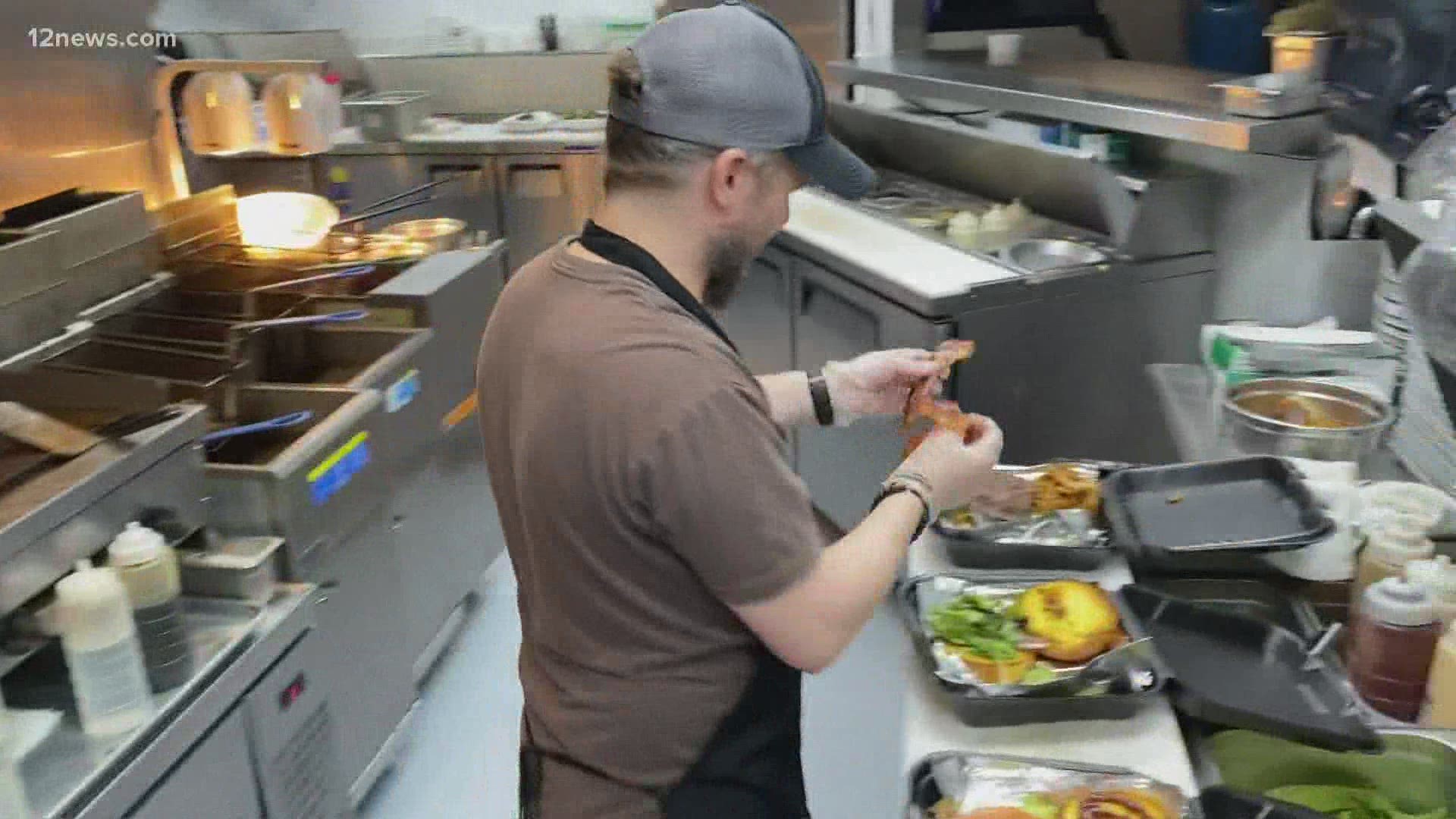 GOODYEAR, Ariz — Saddle Mountain Brewing Company offers dozens of locally brewed beers, cheeseburgers made with buffalo patties, an Irish egg roll you need to taste to believe, and many other dishes.

But it’s no longer a place where you can go and order a pizza because the Goodyear brewpub simply doesn’t have the staff to keep it on the menu.

“We make really good pizza, but it does take time to knead the dough out, to toss the pie, to prep the dough, to do all the shredded cheese, and all the accouterments that go with it,” Villa said. “Once we get all our staff back, we’ll open that back and have our pizza oven rocking again.”

SMBC’s general manager, Memo Villa, said he and the restaurant's owners cut half of the menu this week because they are short-staffed in the kitchen and can’t seem to hire new employees who regularly show up for work.

Villa and the owners have raised wages for cooks and dishwashers to $15 per hour, more than Arizona’s minimum wage, but they are still five to eight employees short of their employment goal. Earlier in April, the brewery had to close its kitchen altogether for a day due to a lack of staff.

“It’s industry-wide,” Villa said. “Visit your local brewery. Outside of most of them, you’ll see a help wanted sign.”

Villa is right. The hospitality industry was one of the hardest hit by the COVID-19 pandemic and its various levels of lockdown beginning in March 2020. Restaurants were forced to move to take-out only business models.

Some closed temporarily. Some will never re-open. Public service announcements encouraged consumers to eat locally to help save the industry. Now, the consumer demand is coming back strong, but many of the back of house staff that prepared foods, cooked on grills, or washed dishes have found other jobs.

Arizona State Professor of Economics Lee McPheters said, as of February, Arizona is the fastest-growing state for warehouse jobs, many of which already pay $15 per hour and may appeal to the same type of worker who once flipped burgers and fried bacon.

McPheters says the restaurant industry may not look as good as a warehouse job “When they’re looking at jobs that perhaps have weak career implications, maybe doesn’t pay what they would like, or maybe working conditions don’t really suit them.”

Another issue facing hiring managers in the restaurant industry is the temporary federal unemployment offered through the CARES Act, passed in March.

Through September, the federal government adds three hundred dollars to state unemployment benefits for those out of work. That can provide more than $500 per week for a one-time restaurant worker. $15 per hour for 40 hours a week is $600, and that is before taxes.

“It’s people getting paid to stay at home and do nothing,” Villa said.

Villa said SMBC’s owners are considering offering health benefits to back-of-house employees, something uncommon in the restaurant business. Across town Pedal Haus Brewing Company in Tempe is trying a different strategy, offering cash signing bonuses, bonuses for staying on the job for six months to a year, and even referral bonuses to current employees.

Pedal Haus’s COO, Chris Purcell, told 12News this is the most difficult hiring climate he has ever seen in 30 years in the restaurant business. Pedal Haus’s owner Julian Wright agreed.

“It seems like a tug of war for employees, “ Wright said by phone. “We are willing to spend the money, but we still can’t find the people.”

Wright called his current predicament a “perfect storm” of economic factors, citing the uncertainty surrounding the 2020 shutdown and federal unemployment benefits as well.

He also said some of the people that may have worked for him in the kitchen, behind the bar, or waiting tables had also left the restaurant to drive for GrubHub.

“At first I was worried it was just us, but I talked to my friends in the industry, and it’s everybody,” Wright said.

CARES Act’s additional unemployment expires in September, but, with America becoming less and less restricted each day, consumer demand is high now, and McPheters believes it will only get higher, as 2020’s pent-up demand becomes 2021’s economic spending spree.

“Economists expect that there’s going to be a real significant springing back of consumer spending on all of the aspects of day to day life that they have been avoiding over the past year,” McPheters said.

In many cases, restaurant demand will have an even sharper increase since many restaurants have closed, and there are now fewer places to spend money that was saved when restaurants were closed.

For Villa, it seems temporary, but that doesn’t make it any easier to deal with.

“So now we’re adapting to what we can do,” Villa said.