A classic Phoenix building is turning over a new leaf. 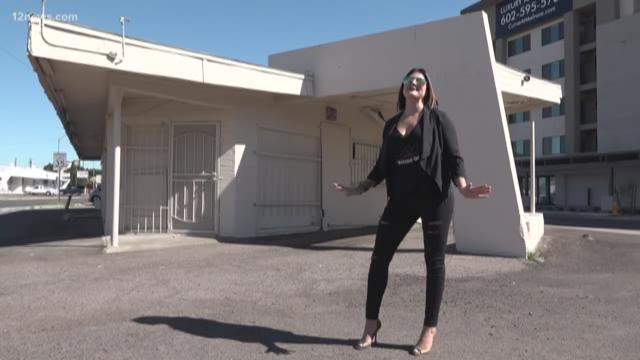 “It was one of the oldest, longest-running liquor stores in the city," said Michelle Dodds, a historic preservation officer with the City of Phoenix.

It was hard to miss the iconic mid-century building. The pink and turquoise paint complimented the Googie-style architecture with soaring roof lines and wings over the double drive-thru.

“It was about making a statement -- it was about optimism and exaggerated building forms," said Dodds.

After a long run, the liquor store closed in 2017 and a new apartment complex now towers over it. A wrecking ball almost brought it to the ground, until preservationists stepped in.

“We started a petition and got a lot of press and ultimately saved this building," said Stacey Champion, owner of Champion PR & Consulting.

Now, a new owner is planning on revitalizing this quirky hot spot.

“The building was so unique and right up my wheelhouse," said Rebecca Golden, soon-to-be owner of the old building.

Clearly Rebecca has a big imagination because the building is in serious disrepair.

“It’s going to be fabulous, that’s all I can say," said Golden.

Rebecca plans to turn the old building into The Googie on Melrose neighborhood restaurant.

“Everything will be based around Palm Springs, so very bright, flamboyant, and fun. We are going to take a spin on mid-century modern and make it new," said Golden.

It will be a full-service restaurant.

“We will serve breakfast, lunch and dinner, we will have a drive-thru, a patio with a recreation area with games and events," said Golden.

The Googie on Melrose is scheduled to have a soft opening this summer.

“I can’t wait. I’m excited for everyone to come in and hopefully they love it. That’s all I want -- love to be shared with everybody," said Golden.