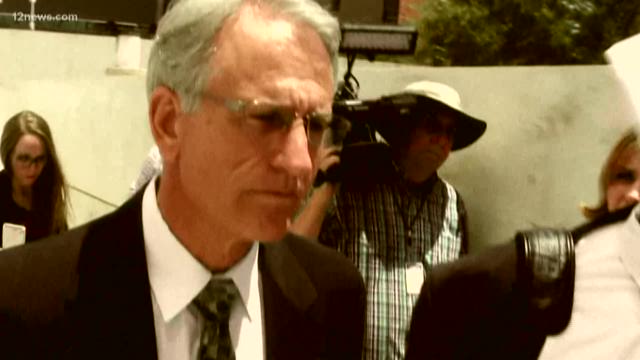 The group of about two dozen people who met at a park in Johnson Ranch one afternoon recently all have the same problem with Johnson Utilities -- water woes.

“It's just a matter at this point of frustration,” said Connie Mays.

She is one of dozens of Johnson Utilities customers who's complained to Call 12 For Action about billed water usage that has exponentially fluctuated in the last year. In her case, she's seen her usage -- for a home with two people -- skyrocket from 5,000 gallons per month to more than 59,000 gallons per month. She's even had her water meter tested. It was accurate and she had Johnson Utilities' technicians check for leaks. They couldn't find any.

“The water use,” Mays said, “There's no correlation between reality.”

But Johnson Utilities said there is a correlation and told 12 News it's because Mays "historically uses high volumes of water." No one from the utility that serves more than 6,000 homes in southeast Valley and Pinal County would talk with 12 News on camera. But Brad Cole, Johnson's chief operating officer, told us there's a logical explanation for all of the billing questions.

Cole even looked at Mays’ account and wrote that based on the frequency and schedule of Mays’ water use, "no errors were made by Johnson Utilities" and her usage is "certainly indicative of irrigation."

And so do the dozens of other Johnson Utility customers with high usage bills, including Denise Farrell.

“Frustration, helpless, angry,” Farrell. “I can pick any phone company I want. I can pick any TV, cable I want. Not the water … we're stuck.”

Our Call 12 For Action investigation has discovered Farrell and Mays aren't alone. The Arizona Corporation Commission, the state agency that that overseas Arizona water utility companies, has received 383 complaints about Johnson Utilities so far this year -- almost five times more than last year.

“We're always concerned when we hear complaints from consumers about a company and yes, when we see a spike, yes, we are concerned about that,” said Angie Holdsworth, the corporation commission's communications manager.

With every complaint about Johnson and other utilities, the commission follows up with both the customer and utility until both are satisfied or the case goes before the commissioners.

So far this year, 96 percent of the Johnson Utilities complaints have been successfully resolved, 15 are still pending and just one could not be resolved.

“This has gotten out of hand and something has to be done with Johnson Utilities,” said Mays, the Johnson Ranch resident.

Until then, Mays and her neighbors just hope their water usage decreases, instead of increases.

Johnson Utility also told 12 News, that if the meter's tested accurate, then the water usage billing is accurate as well. Independent public utility experts said they agree with that conclusion.

If you have a complaint about Johnson Utilities, you can file an official complaint with the Arizona Corporation Commission here. And get in touch with Call 12 For Action here.