The group said they raised almost $20,000 last year for research. 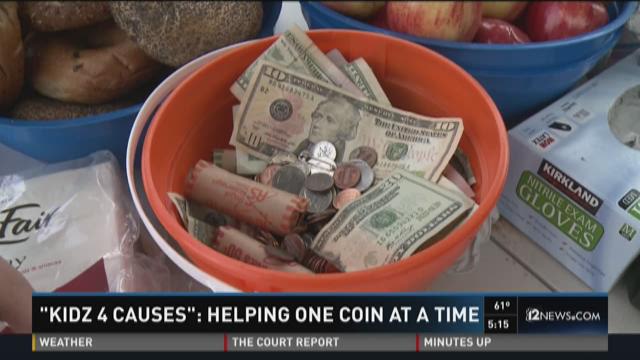 PHOENIX - If you made your way up to the Echo Canyon Trailhead on Saturday, you may have noticed a group of boys holding signs near what looked like a large lemonade stand.

It was a coin drive run by Kidz 4 Causes, a fundraising effort started by a group of middle school friends.

“Initially, we all got together to start a fundraiser. We wanted to raise money for a cause that meant a lot to us,” said Michael Bendok, the 13-year-old co-founder of Kidz 4 Causes.

The group of teens are collecting money to fight rare diseases. They’re doing it in honor of another co-founder’s younger brother, Harrison Steiner.

Harrison was diagnosed on his eighth birthday with a rare lung condition called bronchiolitis obliterans. According to the Genetic and Rare Diseases Information Center (GARD), it is an inflammatory condition that affects the lung's airways.

“Most of the time, I need oxygen to help me breath, because I only have 20-something (percent) lung capacity,” said Harrison. “I can still do the things I like to, just not at the same level I used to.”

Samuel Steiner is Harrison's older brother and couldn't be more proud to do something that could help Harrison and those like him.

“My brother is a loving, amiable, outgoing kid and he's just great to everyone,” said Samuel, who co-founded Kidz 4 Causes.

All money raised will go to The Translational Genomics Research Institute’s (TGen) Center for Rare Childhood Disorders, where they do research on rare diseases.

Kidz 4 Causes raised over $850 and another $172 at the Arizona Rock-n-Roll Marathon. Kidz 4 Causes is putting on a 5K run called Run for Rare Disease Research. The run will be held at Arizona Falls on the Arizona Canal on Feb. 26.

This is the second year the boys have been raising money for TGen. Let’s just say they’re pretty good at it.

“Last year with our coin drive, along with our run, we raised almost $20,000,” said Samuel Stiener.

“It kind of gives you a warm feeling that someone's always there for you. If times become hard for you, someone’s there,” said Harrison.

The boys want the money to go towards research to fight all rare diseases, not just Harrison's.

“It's not about one -- it's about everyone. I think that's what we realized,” said Samuel Steiner.

For more information about the Kidz 4 Causes or to register for the 5K run, visit kidz-4-causes.org