SEATTLE — Rain drizzled down the windows. The weather seemed to match the mood; gray, dreary, unsettling.

But inside their home, Tempra Jones’ family laughed with her, and cried, as they celebrated their last Christmas together.

Tempra knew it was her last Christmas on Earth, as she had been diagnosed with terminal cancer with no treatment options. It was the fourth time her cancer returned. As she faced death, she also faced a choice.

“I never in a million years thought I’d get cancer – let alone four times,” Tempra said. “I’m the one taking control. I’m the one telling cancer ‘you don’t get this one, I get to decide.’”

Tempra lived near Seattle, Washington, in a state that allows physicians to prescribe end of life medication. Laws like this are sometimes called physician-assisted suicide or medical aid in dying bills, but in Washington, it was called the Death with Dignity Act.

Washington is one of nine states that allow physicians to prescribe medication that could end a patient’s life if the patient is determined to have less than six months to live.

For Tempra and her family, the decision did not come easily, and she said she struggled through the end.

“Many times I’ve thought I can hold on, my kids aren’t ready, what if I’m giving up,” Tempra said. “But it never stayed very long. I’m just really ready to stop the pain, stop the grieving for my family.”

Tempra said she was glad she had cancer because it helped her see things differently.

"Things smell sweeter, I love harder, I forget faster. It's a different world and that's what I want for everybody to know. Why wait for something bad to happen before you take that time to appreciate the smaller things in life? Because it really is about all the smaller things that add up," she said.

“Cancer can take everything away and has reins on you, it has control,” said Tempra’s son Gage. “What she wants to do is take some of that control back. I respect that I love her and appreciate her decision and I’ve got her back the whole way.”

Tempra Jones took a fatal dose of medication prescribed by a physician on Jan. 10, 2020.

She ended her life with family and friends by her side.

She chose to invite 12 News anchor Mark Curtis and photographer Roberto Duarte to join her and tell her story in Arizona, a state that has long debated whether to pass similar legislation to that in Washington. 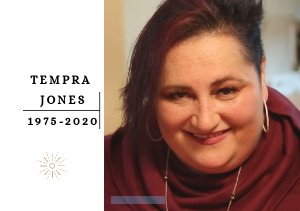 Tempra Jones: A life
Tempra Jones survived cancer three times. The fourth time, she decided to end her life on her own terms. Tempra opted to have an assisted physician death, which is legal in Washington State. Tempra died Jan. 10. These are some of her life's moments.

Each year for the last five years, Arizona lawmakers have proposed bills that would allow terminally ill patients to seek life-ending medications from their physicians – and each year the bills have stalled.

This year, companion bills have been proposed in both the Arizona State House and Senate.

It’s an issue that deeply divides the medical community.

In a 2017 survey, the Arizona Medical Association found 53% of its members were in favor of allowing doctors to prescribe life-ending medications, but the organization remains opposed.

“This is not a debate about dying, it’s about suicide,” said Dr. Zhudi Jasser, a past-president of the Arizona Medical Association. “Where patients want to take control and end their lives immediately before they go through the indignities of the last few days of life – there are other ways to deal with that, but at least don’t involve doctors in that.”

“A physician is really only a good physician if they provide continued dignity in dying,” Dr. Jasser said. “The moment we only prolong life … we’re not physicians anymore.”

There are two bills currently pending that could address the topic HB 2582 and SB1384.

Tempra Jones said her decision was a way of fighting cancer. She said she believes she’ll see her family again.

“There’s nothing wrong with dying, as long as you know we have another place,” Tempra said. “It’s another journey of your life. I’ll see you guys again.”

Here's a checklist we put together of recommended things to keep in mind, not only when you are diagnosed with any illness, but to make sure to see if you're not able to make decisions on your own.