After more than 30 years in service to his country, Maj. Gen. Michael T. McGuire, head of the Arizona National Guard, announced his retirement. 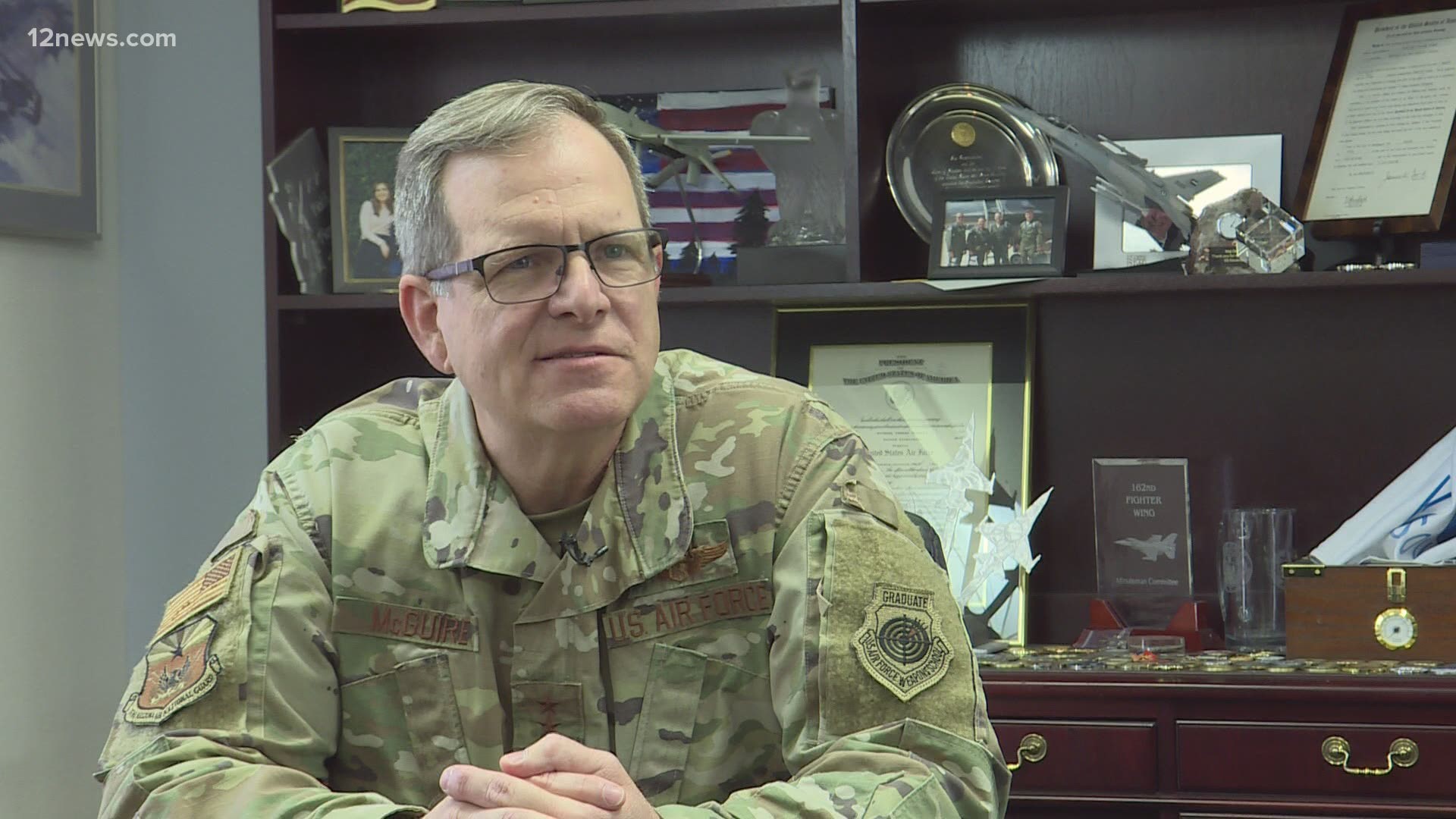 PHOENIX — After more than 30 years in service to his country, Maj. Gen. Michael T. McGuire, head of the Arizona National Guard, announced his retirement and shared some of his post-military plans on Tuesday.

McGuire’s entrance into the military was born of the simple pursuit of athletics.

A football Offensive Lineman in High School, McGuire accepted an invitation to join The Air Force Academy Falcons. His athletic career didn’t take him quite as far as his military career would, however.

“I was an offensive lineman, they wanted me to play outside linebacker, but I was way too slow to do that,” McGuire quipped.

While his time on the gridiron may not have endured, his time in uniform has been remarkable.

Four years after graduating from the Air Force Academy, McGuire fought in Operation Desert Storm, as a fighter pilot at the helm of the F-16. Over the next 30 years, McGuire served as an Instructor Pilot, Commander and finally, as The Adjutant General of the Arizona National Guard. In all those years, none challenged him quite like last year.

RELATED: How to submit your 'Those Who Serve' story

“There has not been a year like 2020 in my career,” said McGuire. “I coined the phrase that this is ' The Next Greatest Generation’ because not since World War II has there been such a need for a mobilization in terms of percentage of our National Guard.”

In the year 2020, the year that McGuire intended to retire, the Arizona National Guard deployed 85% of its troops to assist in border patrol, food distribution, the fight against COVID-19 and in communities such as Phoenix and Kenosha, WI, to aide police departments during a summer of social unrest.

“I'd say the proudest moment for me has been seeing the response of our great service members; the airmen and soldiers of the Arizona National Guard over the last year and the things that we've asked to do, the sacrifices they've made is really pretty incredible,” said McGuire.

When the COVID-19 pandemic hit, the National Guard was called into duty to help in various roles supporting the community. Servicemembers helped at food banks, manned testing sites and now are playing a vital role in the vaccination efforts throughout the state.

“Every soldier and airman in Arizona is part of the Arizona community; they're a teacher, they work in manufacturing, in retail and transportation, or some other sector of our great economy,” explained McGuire. “And when we ask them to come on duty, they walk away from that part of what they're helping to generate in our economy to be part of this great team.”

As for post-retirement plans, the Major General says he doesn’t have specifics to share, yet.

“First, spending some time with my family,” said McGuire. “My only granddaughter just moved here in the last week and a half. She's here in the valley now, so she'll keep me busy: she's two-years-old.”

Service is a constant theme when McGuire is asked what he’ll do next.

During a March 5th deployment ceremony, McGuire got choked up when discussing his desire to serve his State and his Country.

“I have a passion for service. So, we'll see what that leads to subsequent to my military retirement,” McGuire said. “I think that leadership is probably one of the things that are missing the most in society across the board. We don't know what's going to come out of this next but if we have great leaders at every level, we'll be able to overcome it.”

McGuire pointed to what he feels is his strongest attribute: his ability to lead. Rumors have circulated that he will eye a Senate seat after retirement, but McGuire downplays those rumors, stating only that he hopes to have some role in leading his community forward.

“If you ask me what the greatest asset I could provide to the great State of Arizona, and our local communities, it would be having some role in continuing to try to lead and mentor the people around me,” said McGuire. “Public service and leadership is something that I would not be averse to, but that is a completely different space and I would have to take some time. In uniform, it's totally inappropriate for me to get into a partisan political discussion.”

More Those Who Serve stories: