Bella the dog was lost after a serious crash near Flagstaff which left her owner injured. Now, she's recovering at a local vet. 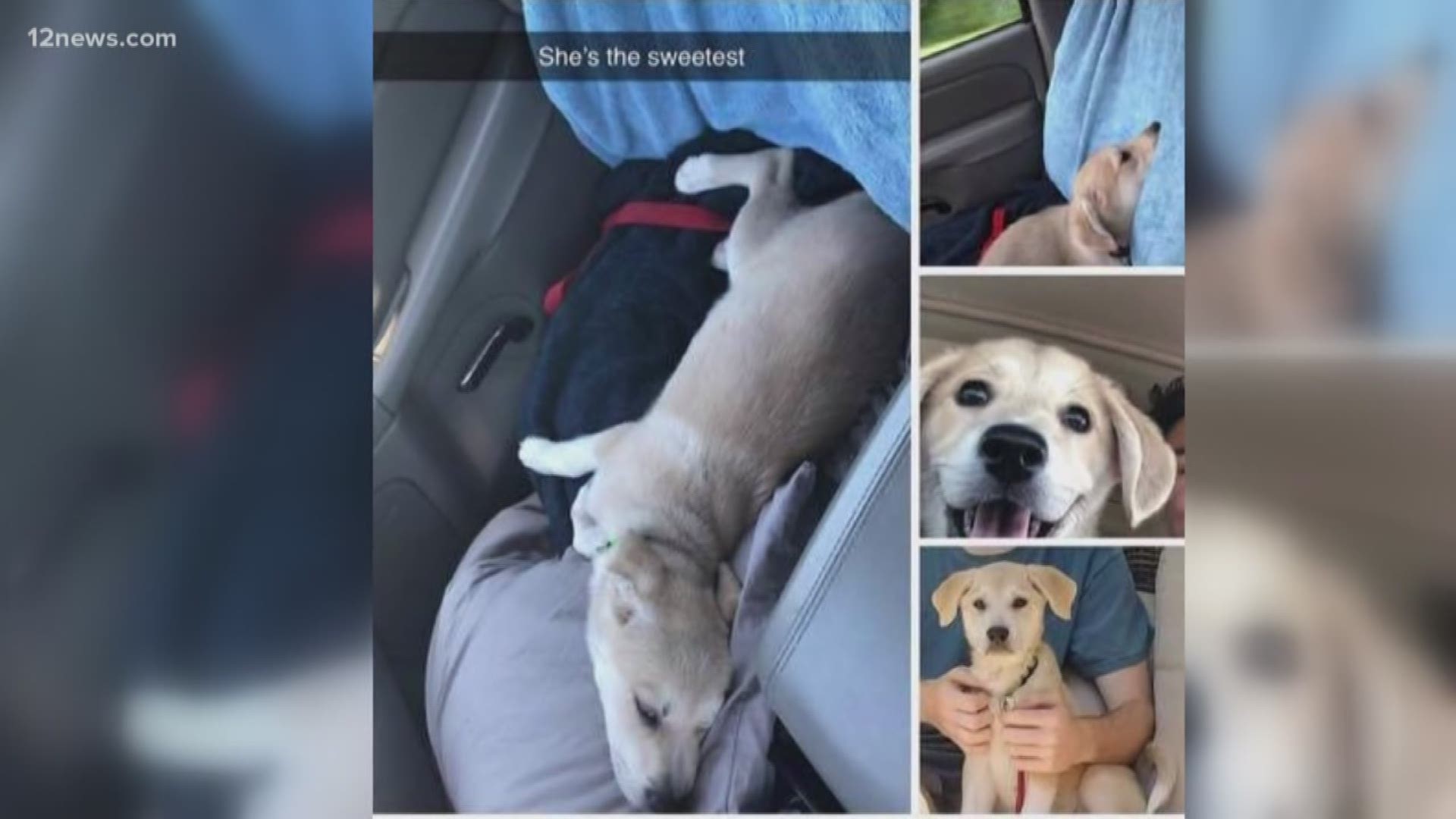 FLAGSTAFF, Ariz. — Thanks to a few good Samaritans, an adorable little puppy is on the road to recovery after surviving a serious crash on I-40 near Flagstaff and going missing for nearly two weeks.

According to Naumann, Bella went missing after she and her owner were involved in a scary car crash on May 14. Naumann says Bella’s owner, a young man, was airlifted to Phoenix for treatment and then transferred to a hospital in California with serious but not life-threatening injuries.

But Bella was missing. Naumann says the man’s stepmom paid attention to Flagstaff shelters to see if Bella had been found. Naumann, along with her friend Beth, eventually came across the case thanks to a missing dog Facebook post. They just happened to be in Flagstaff too over the Memorial Day weekend.

Naumann and Beth spoke to the young man’s stepmom and told her they were willing to help. But they would eventually learn the crash happened two weeks prior.

“Our hearts sunk - we were very concerned that the dog could have suffered serious injuries during the crash and we hoped we wouldn’t be too late,” Naumann wrote in the post.

Naumann and Beth investigated a recent stray at a local animal shelter and even searched the area on westbound I-40 near milepost 202 where the accident report said the crash happened. No luck.

Naumann said she was granted permission by the towing company to inspect the vehicle involved in the crash.

“I got to the towing shop and looked carefully throughout the vehicle – no sign of the pup for sure. But BOY was this a serious accident! So grateful that the owner survived!” she wrote.

The tow truck driver, however, gave them a lead. According to Naumann, the driver pointed out the actual spot on the stretch of highway where the crash happened. It was a mile east of where Naumann and Beth had initially looked.

“I thanked him and knew I would need to head back out there the next morning,” she wrote. “But, I thought I could at least drive over to that area once again to get a feel for it before going out to search tomorrow”

Naumann said once she got to spot where the tow truck driver had pointed her to, she could tell right away. There was broken glass and a flattened freeway sign. She pulled off the road and began searching down an embankment and through the brush.

According to Naumann, she was sending pictures and video of the area back to Beth and the man’s stepmom, even narrating the video, when she heard a bark.

“Someone was listening to me and was NOT happy that I had not arrived at the correct bush yet,” she wrote.

It was Bella. Naumann said she found Bella hooked by her leash in a bush.

“My hands were shaking as I worked to untangle her, being VERY conscious of the fact that she could bolt once freed,” she said.

Once free, Naumann said she rushed Bella to her car and contacted a local veterinarian. Bella was severely dehydrated, emaciated, anemic and her gums were grey.

According to Naumann, Bella needed an “immediate” blood transfusion to survive.

Now, Bella is on the road to recovery still at the Flagstaff clinic. Naumann said Tuesday in an update to her initial post that Bella is stable but “still not strong enough to be discharged.”

She’s expected to be reunited with her family once she’s healed.

Cheryl Naumann
UPDATE May 28, 3:30 pm I visited Bella this afternoon. She is more stable but still not strong enough to be discharged. I have added the photos of her bloodwork results from last night, and a picture...