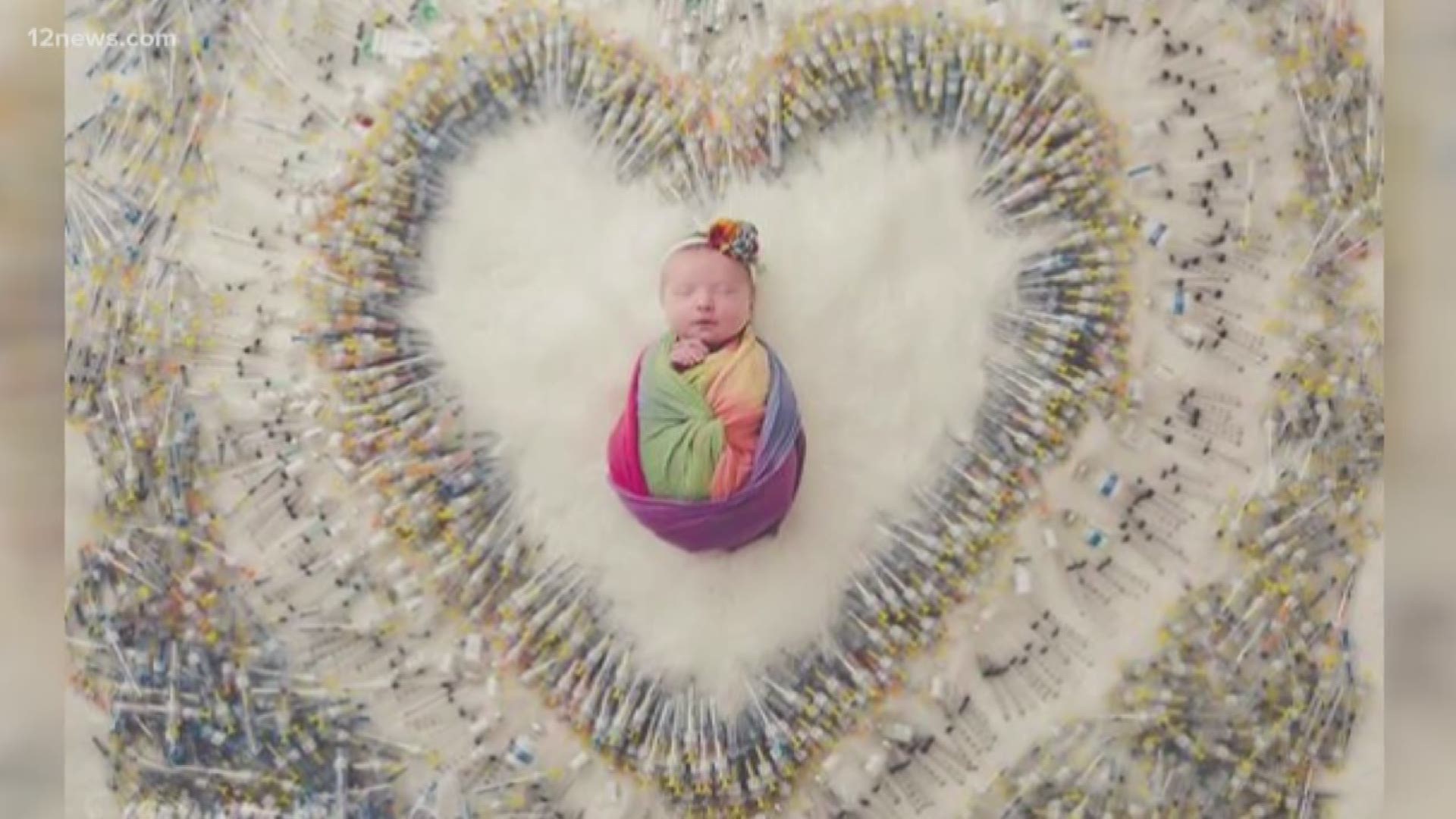 GLENDALE, Ariz. — A photo of a baby girl surrounded by needles is providing a powerful reminder to never give up hope.

The needles are in vitro fertilization (IVF) injections that her mother had to take in order to get pregnant.

Packer Family Photography, based out of Glendale, posted the picture on Instagram with the caption: "4 years, 7 attempts, 3 miscarriages and 1,616 shots."

That’s what it took to create this child.

A post shared by Samantha Drake Packer (@packerfamilyphotography) on Aug 10, 2018 at 7:32pm PDT

The image is packed with all the emotions of an arduous four-year journey for Patricia and Kimberly.

“When I saw it laid out, I just thought, ‘That was hard for me.’ I just saw all my emotions kind of there for the past four years, and you kind of put your body through havoc, essentially,” Patricia said.

“I think kind of overcoming and waiting four years makes it that much greater,” Kimberly said.

The couple knew all along that they wanted to incorporate their IFV needles in a photo shoot eventually, so they started saving the needles right from the beginning.

Samantha Drake Packer, the photographer, said when the family asked if they could take a picture with their IFV needles, she had the idea to shape them into a little heart.

But when they brought in two huge boxes, the heart became not so little.

She eventually ran out of time before the appointment and poured the rest of the needles on the outside.

Baby London was swaddled in a rainbow cloth to signify that she is a rainbow baby, a child that follows a miscarriage, neonatal death, stillbirth or infant loss.

Both the family and the photographer are being applauded for sharing such an encouraging image with the rest of the world.

“To see somebody go through it in such a mass quantity like that, I think it just makes people feel some sort of emotion within themselves about their own journey,” Kimberly said.

“I think the biggest statement of the photo is that a lot of these women struggle with infertility and they feel like they can’t talk about it. It makes other people uncomfortable, or people don’t understand how hard it is or what they’re going through,” Packer said.

After years of struggle and pain, Patricia and Kimberly are ready to begin a new chapter of their lives.

“It was hard, but worth it,” Patricia said.

“We are complete,” Kimberly said.