Erik Peterson was determined to attend his graduation, even though his left leg was amputated below the knee after a motorcycle crash a week earlier. 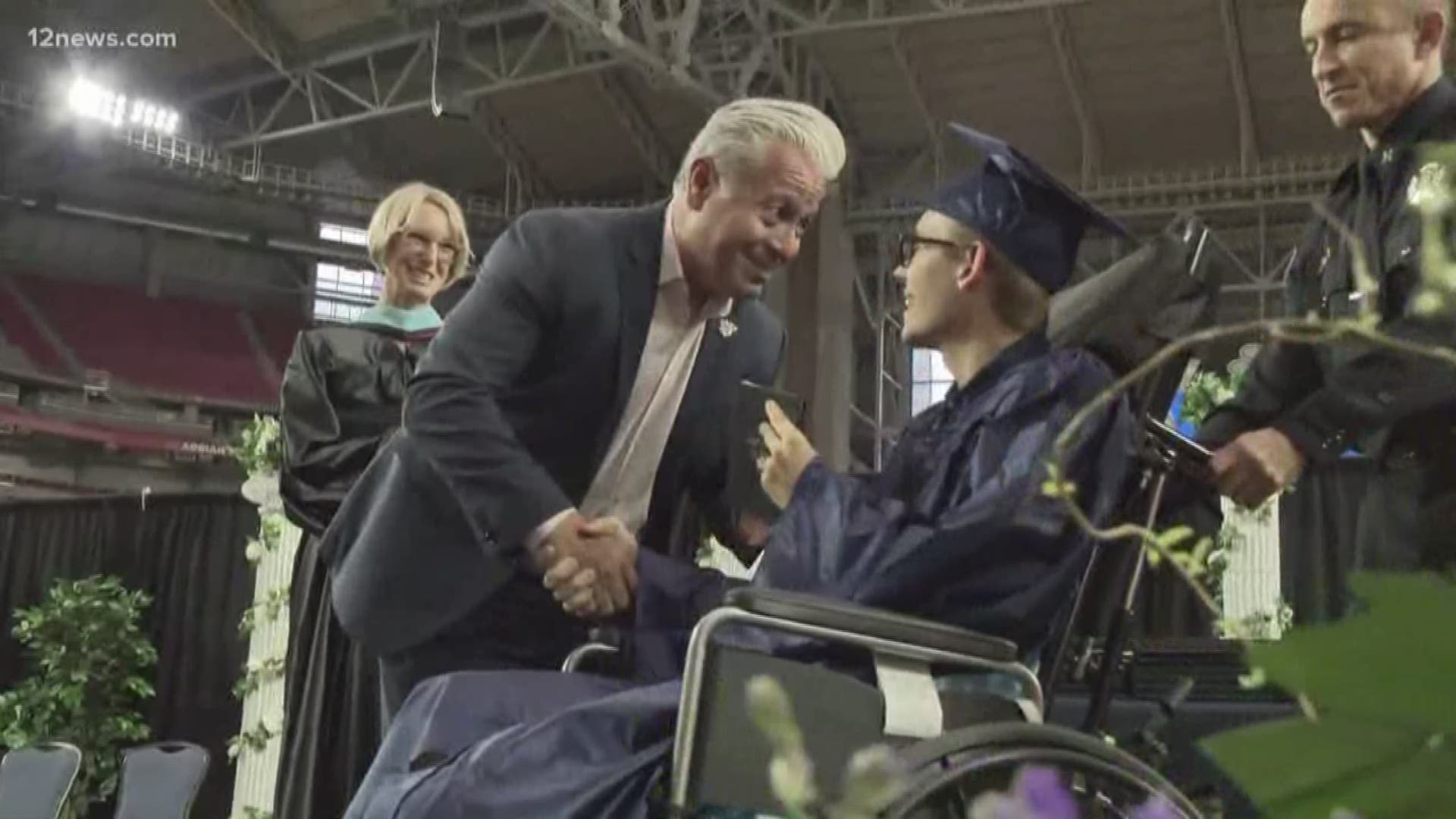 GLENDALE, Ariz. — Every high school graduate overcomes something on their journey to graduation, but Erik Peterson’s something is more than most.

“It feels great,” Peterson said while sitting in a wheelchair at State Farm Stadium Wednesday night.

The senior from Raymond Kellis High School in Peoria was involved in a motorcycle wreck just one week earlier.

“A week ago, him being alive wasn’t even a thought,” said trauma surgeon Robert Hoffman at Banner Thunderbird in Glendale.

Dr. Hoffman remembers the night Erik was rushed to the trauma center.

“He was in really bad shape. He had lost quite a bit of blood, in shock from blood loss. He couldn’t breathe on his own,” Hoffman said.

The team of doctors at Banner Thunderbird knew the only way to save his life was to amputate Erik’s left leg below the knee. It was a successful surgery, but then came the moment his father and girlfriend had to tell him the news.

“They looked so sad and about to cry when I woke up. They looked at me and said, ‘You were in a really bad motorcycle accident. You’ve been out three days and you—you’re missing half of your left leg, and now you’re an amputee.’"

Erik remained in good spirits but knew he had a long recovery ahead. The last thing in anybody’s mind was graduation, but he wasn’t ready to give up.

“They were all telling me you’re not going to be able to graduate or go to the stadium or walk across the stage and get your diploma, and I kind of thought to myself, 'They’re wrong,'” Erik said from his hospital bed.

They were wrong, all of them. The afternoon of graduation, With a little help from Peoria Fire and Medical, Erik was loaded into an ambulance bound for State Farm Stadium.

Determined to roll across the stage with his classmates. Erik’s story defies medical logic and shows the type of personality he has. How many people would look on the bright side just a week removed from losing half their leg?

“I’m fortunate enough to have my knee still so I can walk like a normal person. I don’t have to limp and nobody will really notice unless I wear shorts.” Erik said with his usual smile.