Firefighters cycling their way across the U.S. to commemorate 9/11 make stop in Scottsdale

The group is fundraising for firefighter cancer awareness, firefighter mental health and severely wounded veterans as they bike 3,100 miles. 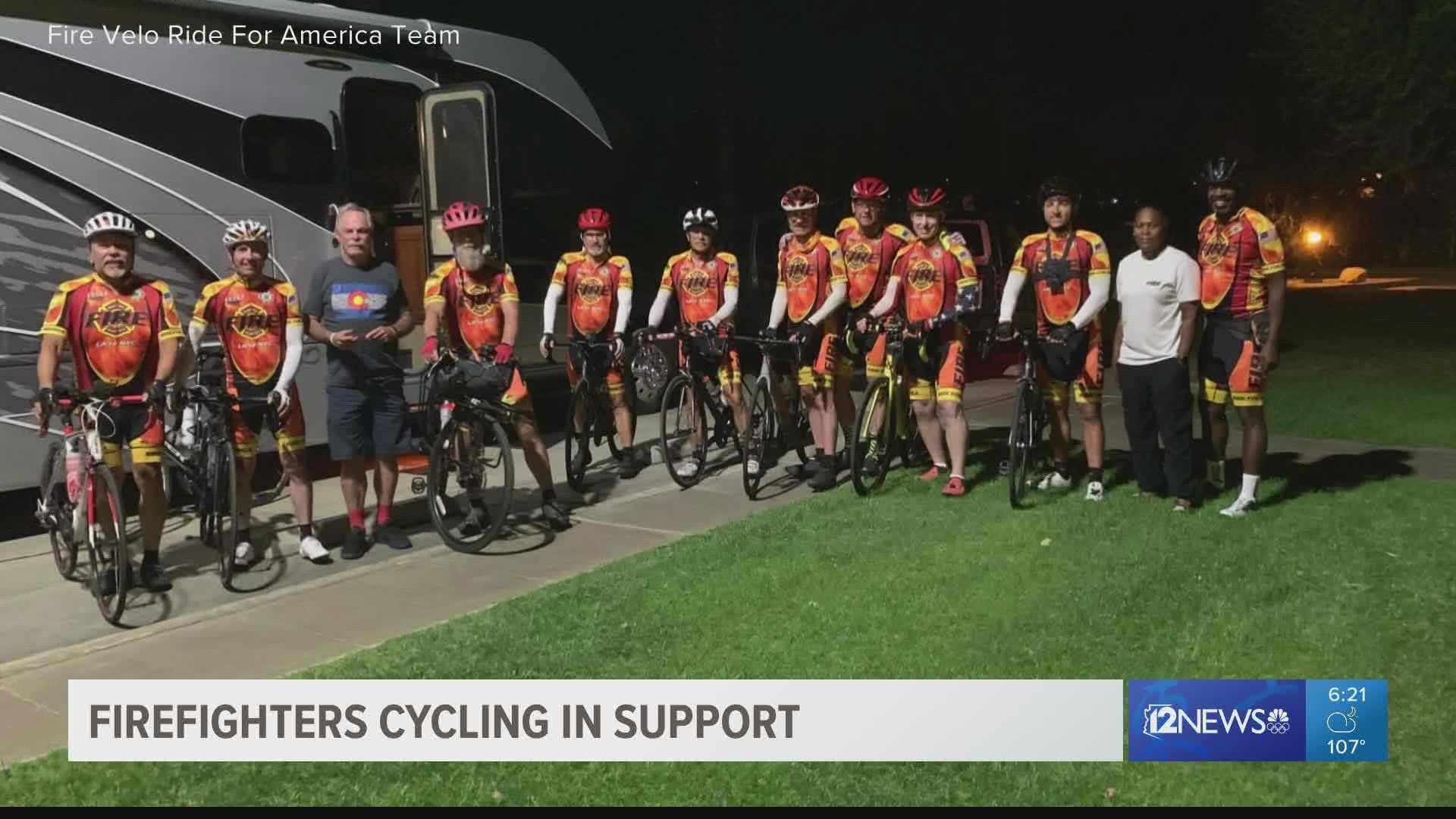 SCOTTSDALE, Ariz. — More than a dozen active and retired firefighters are making their way from Los Angeles to New York to commemorate the 20th anniversary of 9/11.

On Friday, the group stopped in Scottsdale after completing about 450 miles of their roughly 3,100-mile journey.

In total, 15 active and retired firefighters are riding their bikes on the Fire Velo Ride for America to New York City.

The group arrived in Scottsdale Friday morning from Wickenburg. They’ll leave Saturday to go to Payson before continuing along I-40 to the east coast.

“Could be anywhere from four to six hours, six to eight hours, depending,” cyclist and retired Deputy Chief from San Francisco Fire Department, Gary Massetani said. “If you throw a couple of flats in there add another hour.”

So far the trip from LA to Scottsdale has meant riding in the desert sun, even though the group will start in the very early morning hours to try and stay cooler.

“It has been brutal,” cyclist and retired Captain with LA County Fire, Glenn Smith said.

“None of us are really used to riding in 118-degree weather,” Massetani said.

Riding for a purpose

While the journey is long, and the conditions challenging, the cyclists are riding for a greater purpose.

“We’re losing so many brothers and sisters in the fire service,” Massetani said.

The group is fundraising as they are riding to New York, raising money for firefighter cancer awareness, mental health and severely wounded veterans.

Fire Velo said the funds they raise will be going to charities including the San Francisco Firefighter Cancer Prevention Foundation, Friends of Firefighters, The Fire Family Foundation, and the Gary Sinise Foundation.

“You don’t ever really look at it the same way when somebody who is close to you is touched by it,” Smith said. “It changes your whole perspective.”

If you want to support them on their journey, you can donate on their website, here.

RELATED: Tempe to honor veterans with 'Elevate Our Heroes' banners

From Scottsdale, the group will have about 2,600 miles to go before getting to New York City.

“It’s like eating an elephant, one bite at a time, one pedal stroke at a time,” Smith said.

The group will be arriving in New York City in time to honor the 20th anniversary of 9/11 at Ground Zero.