Could 'murder hornets' be a problem for Arizonans?

According to the New York Times, the hornets kill up to 50 people a year in Japan and have arrived in the United States for the first time. 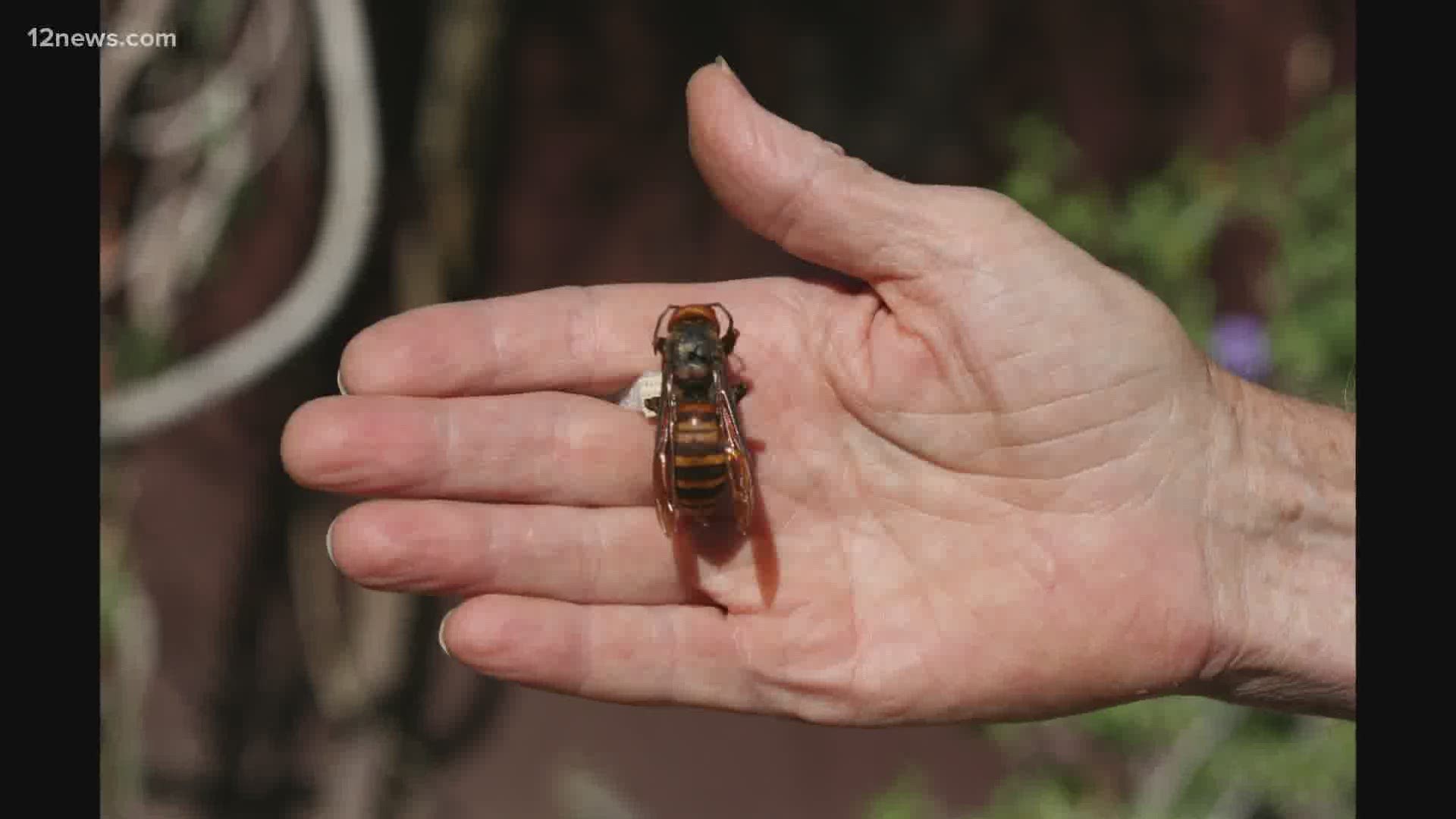 PHOENIX — There's no doubt that you have seen stories about these so-called "murder hornets" popping up on your social media feeds.

"Murder hornets," more commonly known as the Asian giant hornet, are about two inches long with a yellow-orange head.

According to the New York Times, the hornets kill up to 50 people a year in Japan and have arrived in the United States for the first time.

But how dangerous are they? And should we be worried about them here in Arizona?

Justin Schmidt has been studying the hornets all of his life. He has written on them since the early 1980s.

As a professor adjunct at University of Arizona and a private Entomologist, Schmidt says the arrival of the Asian giant hornet is an unwelcome sight.

"First of all, they are big and they are beautiful," Schmidt said

"Beyond that, they are scary."

RELATED: 'Murder hornets' are showing up in the U.S.

As the Hornets move south from British Columbia to Washington state, many fear this invasive species will decimate the local bee populations.

"That's actually the main risk, is to honeybees," Schmidt said.

The "murder hornet" actually gets its nickname from clipping the heads off of its prey -- in most cases, honeybees. A bee's larva is a desired food for the hornets.

Credit: AP
A dead Asian giant hornet sent from Japan is held on a pin by Sven Spichiger, an entomologist with the Washington State Department of Agriculture, Monday, May 4, 2020, in Olympia, Wash. The insect, which has been found in Washington state, is the world's largest hornet, and has been dubbed the "Murder Hornet" in reference to its appetite for honey bees, and a sting that can be fatal to some people. (AP Photo/Ted S. Warren)

“That’s actually the main risk, is to Honeybees,” Schmidt explained.

“They [hornets] don’t like worker honeybees very much, because they’re just nasty flavors of venom and various glands in their head that release chemicals for communications. Honeybees don’t taste very good. But their young, their larva, are yummy.  So, what they will do is they will overwhelm, just smashing, literally.”

Schmidt said the hornet will use its large mandibles to cut the heads off of honeybees.

Each hornet can kill three or four honeybees in a minute.

When a dozen hornets attack a bee colony, it’ll only take a few hours for the hornets to completely kill the colony. After that, they take the larva and bring it back for the rest of the hornet colony to enjoy.

But Schmidt said the chances are very low that the "murder hornet" will settle down here in the Southwest.

"It's conceivable they can survive in northern Arizona, in the White Mountains, for example."

But without the constant source of moisture, Schmidt said he believes the hornet will stick primarily to more coastal areas of the country.

He also thinks we may be able to keep these hornets from getting a strong foothold in the U.S.

"There's a couple of advantages you have when it comes to exterminating them," Schmidt said, adding that they have relatively low reproduction.

The hornets only produce roughly a dozen eggs for season, as opposed to the thousands that other insects are known to produce.

Couple that with the high profile that being a 2-inch hornet has and folks are bound to notice their presence.

When state inspectors are alerted to the possible presence of the hornets, traps will be set and the queens can be captured, eliminating the threat of the colony.

But that is not a worry for entomologist in Arizona, for now.

"No, I don't think we'd have to worry about them at all."