The Cardinals fan got to meet Big Red as part of his recognition for being such a positive influence at PCH. 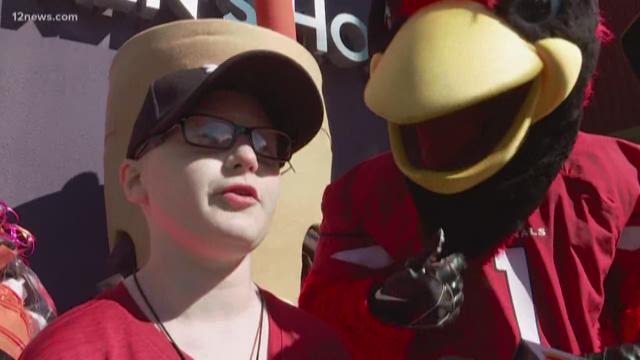 PHOENIX - At the Child Life Center at Phoenix Children's Hospital (PCH) Tuesday, the Arizona Cardinals mascot, Big Red, mugged for the camera while 9-year-old Kameron Sherman took aim at the Dunkin' Donuts donut hole. Back in March while playing in the park, something else took aim at him.

"He fell off his scooter and got a softball-sized bruise almost instantly," Kameron's mother, Debbie Sherman said.

This injury was different for the boy who's played club soccer for a couple of years and gotten his share of bumps and bruises.

Sherman says after a week of tests, doctors found a tumor along with a rare, aggressive form of cancer called rhabdomyosarcoma. Kameron immediately began a lengthy course of chemo treatment.

After six months, Debbie Sherman was happy to report "the tumor, it's gone, but the doctors here and at Mayo want to make sure any little cancer cell that's been hiding is gone too."

The tumor is gone, but thankfully Kameron's uplifting spirit remains around the hospital.

"(On) maybe his worst day, he's always happy and positive," Dunkin' Brands Marketing Manager Heather Morin said. "And that helps, too, when there's other children around ... seeing him being positive. He's just a great inspiration."

Dunkin's Joy In Childhood Foundation heard about Kameron the patient, and Kameron the Cards fan, so they threw a party with Big Red and the cheer squad, and then capped off the day with a very special gift.

At a hospital presentation, Morin asked the staff, "Hey, do you have a Cardinals fan at the hospital that Dunkin Brands can award some tickets too?" Young Kameron let out an audible gasp. Morin then presented the bewildered patient with four tickets to the Cardinals-Jaguars game on Nov. 26.

After he caught his breath and recalled his favorite Cardinals player, Larry Fitzgerald, Kameron broke into song to celebrate one of the best days he's had in recent months.